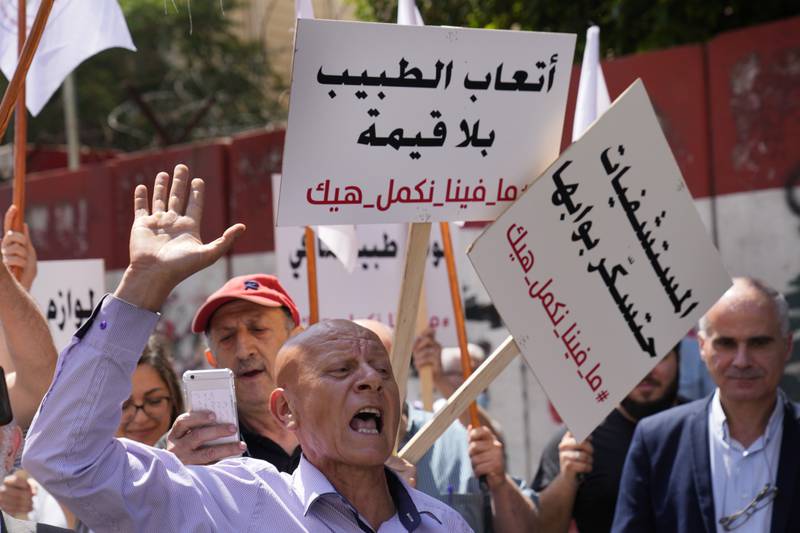 Protests and sit-ins littered the Lebanese capital, Beirut, on Thursday as the Lebanese pound plummeted further in value to a record low of LL35,000 to the dollar.

The effects of the Lebanese currency’s depreciation have rippled throughout the tense country as disgruntled public sector employees and protesters erected roadblocks and conducted sit-ins. Lebanese fear that the recent parliamentary election and continuing wrangling over government formation may lead to further political paralysis, hindering efforts to resuscitate the economy.

By Thursday afternoon, a band of fuel lorry drivers had blocked off intersections on the symbolic ‘ring bridge’ which separates east and west Beirut, while taxi drivers blocked the road leading to the country’s Interior Ministry.

The roadblocks were in response to rising fuel prices, which are dictated in part by the currency’s fall in value.

The purchasing power of Lebanese, most of whom are still paid in the local currency, has been drastically reduced — a full tank of petrol now costs as much as some residents’ monthly salary.

The country’s economic collapse has led to shortages in electricity, water, medicine, fuel, and bread. Meanwhile, high inflation and soaring prices for basic goods and services have defined the lives of most Lebanese.

Asked by The National why he was participating in the roadblock at the ‘ring bridge,’ a protester answered: “The usual.”

“The dollar rate, the economic situation, fuel prices, shortages. And, and, and…” he continued, his hand gestures indicating the endless supply of troubles caused by Lebanon’s collapse.

Bassem Tleiss, president of the confederation of transportation syndicates, said the roadblocks were not organised by any of the transport unions or syndicates.

“The movements that are happening on the ground right now are solitary decisions,” he said. “But I’m not against those who are expressing their pain, and I don’t blame them.”

Mr Tleiss indicated that given the recent price increases and the continuing depreciation of the currency, the syndicates would likely meet next week to organise a plan of action. “Everything is falling apart,” Mr Tleiss said. “Along with the state.”

Bakers also protested in Beirut on Thursday, fearing an abrupt lifting of bread subsidies which may cause further social unrest.

Last week, local media quoted the head of the bakery union Ali Ibrahim as saying that there were only “three days of flour stocks”. There were reports that bread was sold at more than twice the state-set price in the southern town of Nabatieh.

One of the reasons for low stocks is a dysfunctional subsidy system supported by the central bank. It has been spending roughly half a million pounds a month in subsidies and to prop up the local currency.

But this has proved unsustainable. The value of the Lebanese pound fell by over 20 per cent since a new Parliament was elected on May 15. It has lost around 95 per cent of its overall value since 2019, when the first signs of economic trouble became evident.

Protesting what they view as the central bank’s arbitrary policies, doctors rallies outside the bank’s headquarters in Beirut on Thursday.

Two medical professionals’ unions — the Syndicates of Doctors in Beirut and the North and the Syndicate of Private Hospital Owners — announced a two-day strike that ends on Friday.

Georges Ghanem, chief medical officer at the Lebanese American University – Rizk Hospital, who did not take part in the protest, said banks did not allow hospital employees to withdraw their salary in full in Lebanese pounds.

A spokesman for the Association of Banks in Lebanon said this was because the central bank limits cash withdrawals from banks’ current accounts.

“Employees are completely demotivated, they’re looking for jobs outside the country,” Dr Ghanem said. Hundreds of thousands of Lebanese are believed to have left the country since the start of the crisis.

“The Lebanese are exhausted,” he said. “There’s no government plan to tell us what to expect in the next three or six months. We’re living in chaos.”

Hospitals also struggle with medical shortages caused by the fluctuating exchange rate. “A few weeks ago we had shortages of essential products like anaesthetics and cardiology drugs,” Dr Ghanem added. “Hospitals can’t manage their stocks properly. Relations with suppliers have become tense.”

The skyrocketing price of fuel has also hit hard Lebanon’s state-run water companies, which rely on fuel to pump water from underground wells.

In south Lebanon, taps went dry from Thursday to Saturday, said Wassim Daher, head of the state-run regional Water Establishment. Locals who can afford it must buy water from private suppliers.

In addition to water cuts, the state run National News Agency reported on Thursday that the southern city of Nabatieh and 42 smaller adjacent towns had been suffering from a total blackout for the last five days.

This has caused “losses ranging from the contents of home refrigerators, to businesses, factories, and restaurants,” wrote the NNA.

Electricity output, which also depends on fuel, is reaching record lows across the country. Lebanon’s national electricity company said last week that it would cut its output further, from just a few hours a day, after burning through most of its fuel supplies during the run-up to the parliamentary election.