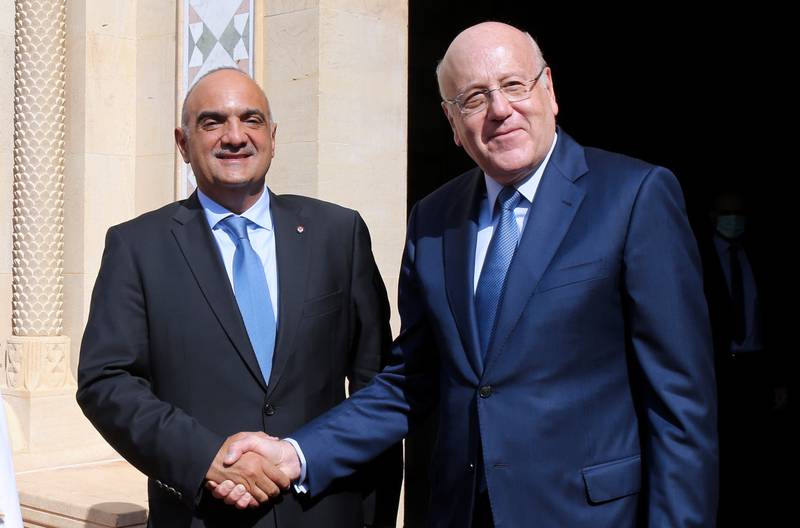 Jordan will work to strengthen ties with Lebanon, the kingdom’s prime minister told his Lebanese counterpart in Amman on Thursday, despite delays plaguing a major electricity deal involving the two countries

Jordan has been trying to improve relations with Lebanon in an attempt to secure more influence in the region since US President Joe Biden took office in January last year.

The US is Jordan’s main donor and has thousands of troops in the kingdom as part of a military agreement. The current American administration is regarded in Amman as being friendlier than its predecessor, which focused on normalisation between Arab states and Israel.

Washington supported a deal this year under which 250 megawatts of Jordanian electricity were supposed to flow to Lebanon by March through Syria. The deal was widely regarded as a delivering political and financial gains for Syrian President Bashar Al Assad.

But Lebanon’s Energy Minister Walid Fayad said on Wednesday that “politics and bureaucracy” were behind the delay and that the World Bank, which was supposed to finance the deal, had named new conditions.

Mr Fayad and did not rule out that US support for the deal may have waned since the Russian invasion of Ukraine three months ago.

The Lebanese government oversaw general elections in the country last month and is due to be replaced once a new administration is formed, a process that could take months.

Historically, Jordan has stayed away from involvement in Lebanon, particularly during the 1975 to 1990 civil war there.

Relations cooled after the 2005 assassination of Lebanese statesman Rafik Hariri, who had sought good relations with Jordan and other Arab countries as part of his drive to restore Lebanon’s position as the business and tourism centre of the Middle East.

The Hariri assassination set the stage for the dominance of Hezbollah, the Shiite guerrilla group and political party supported by Iran, over Lebanese politics.

Jordan has refrained from criticising the group but does note welcome its rising influence in Lebanon and the rest of the region.