The remaining part of the ailing northern silos at Beirut’s port  eventually collapsed on Tuesday morning, sending dust billowing into the air as a fire that broke out more than a month ago still burned.

The silos, heavily damaged in the August 2020 explosion that struck the Lebanese capital and killed more than 200 people, had been falling intermittently over the past few weeks. The southern half of the structures remains standing and the government will now investigate how it can stabilise that remaining part.

A number of caretaker government ministers will meet on Tuesday afternoon to discuss the next measures following the final collapse of the northern silos, which happened at about 7.40am.

Caretaker environment minister Nasser Yassin said the dust had spread out into the sea but urged people near the port to wear masks.

The health ministry has issued medical guidance for those in the vicinity of the port, particularly given the presence of “high levels of Aspergillus-type fungi” in the area, according to air quality samples taken.

While that fungi does not typically pose a health threat, the ministry said “inhaling these materials in large quantities and for a long time could expose people suffering from respiratory or immune diseases to complications which could turn out to be dangerous”.

The fire, which authorities have struggled to put out, accelerated the tilt and collapse of the silos. The blaze has been blamed on fermenting wheat stocks inside the silos and the summer heat. Only 12 of the original 48 silos remain standing.

For survivors and families of the victims, the fire has compounded the grief and trauma from the 2020 blast that injured thousands and destroyed large parts of the Lebanese capital.

Late last month, the first part of the northern block collapsed and days later — on the second anniversary of the explosion — more of the silos fell.

With the northern half now flattened, it is hoped firefighters and the military can get closer to the silos and extinguish the blaze. They had been unable to do so because of the dangers associated with the expected collapse of the northern section.

Mr Yassin said the rubble and debris could now be removed and that the southern block was stable “for now”.

The Lebanese government last week approved a plan that would demolish what was left of the northern part of Beirut’s collapsing wheat silos  and reinforce the southern section.

Mr Yassin said by demolishing the northern silos, the rubble and grain could be cleared away, thus removing the source of the fire and preventing pollutants from being emitted into nearby neighbourhoods.

Some families of those who died in the 2020 explosion had wanted the silos preserved as a “silent witness” and memorial to the victims. Many also believed the silos could contain evidence that would prove useful to a stalled judicial probe.

Two sitting MPs in the Lebanese Parliament have been charged in connection with the investigation but have refused to attend interrogation hearings.

In April, Lebanon’s Cabinet approved the demolition after a survey found the silos could collapse in the ensuing months.

But families of the blast victims filed three separate lawsuits   in a bid to stop the demolition.

The blast on August 4, 2020, happened after a huge stock of ammonium nitrate, left in storage at the port for years, caught fire.

The explosion has been blamed on mismanagement and corruption and is viewed as a symptom of the country’s many systemic  problems.

Much of Lebanon’s population has been plunged into poverty since an economic collapse that first became apparent in 2019. The local currency has dropped in value by more than 90 per cent and there are widespread shortages of basic necessities, including water, electricity and medicine. 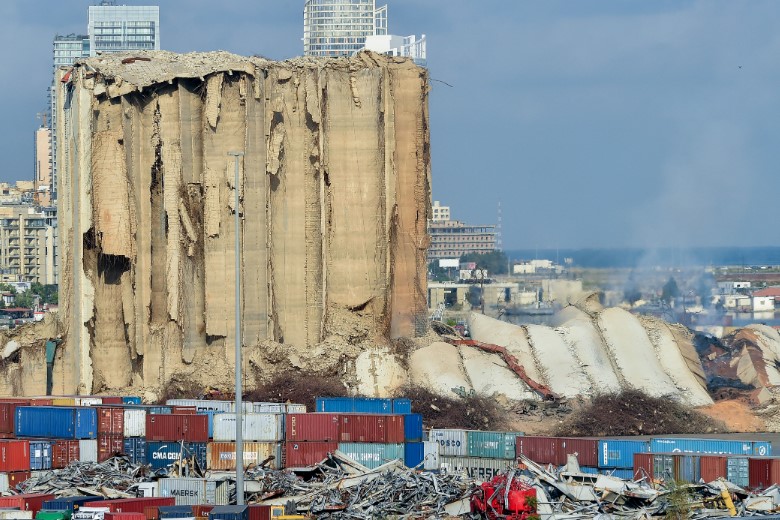