Lebanese elections: can Tripoli’s activists break the hold of the crisis-hit politicians? 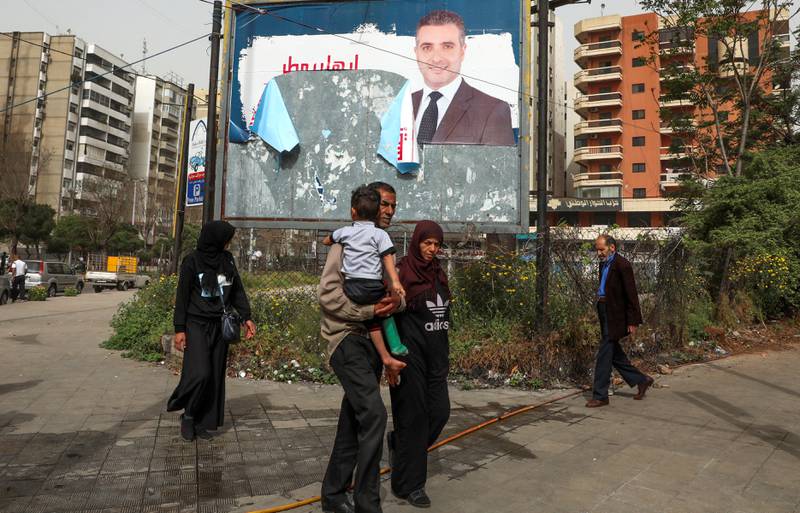 In a dimly lit room without power in Tripoli, a handful of young volunteers work at laptops in support of one of the dozens of candidates running for election in Lebanon’s neglected and often maligned second city.

The office is close to Tripoli’s Al Nour Square, where protesters against Lebanon’s ruling classes gathered for weeks in 2019. Despite the lack of electricity in the room, the energy is frenetic.

Pacing through the office, switching from one phone call to another, Camille Mourani is running for Tripoli’s Maronite seat with the National Bloc on the “Revolt for Justice and Sovereignty” list in Lebanon’s North ll area, which has 11 seats up for grabs.

Mr Mourani is one of those candidates billing themselves as close to the October 17 Revolution of 2019. He believes the coming elections present a genuine opportunity for change in Tripoli.

As Lebanon grapples with crises including a devastating economic meltdown, Mr Mourani said the situation in the country’s poorest city is particularly severe, with many areas “completely disconnected” from the rest of Lebanon.

“The city played a big role during Lebanese history, in politics, in the economy, and even now during the revolution. And we cannot leave it alone,” he said.

The question is whether people such as Mr Mourani and those close to the October 2019 revolution can mobilise support to take on the wealthy traditional parties that dominate parliament even as these parties themselves face a crisis of confidence.

Tripoli, a Sunni-majority city, has had a turbulent recent past ― and an image problem. It is the home of billionaire Prime Minister Najib Mikati, whose Azm Movement won four seats in Tripoli in 2018.

Occasionally the scene of inter-communal violence, it is often painted as a hotbed of extremism, something its residents firmly deny.

“I believe that we have the duty to link this city to this country again,” Mr Mourani said. “We need to open up the city to the country. People are always afraid to come up to Tripoli, we need to change this image.

“And this image doesn’t come up by chance. These actually existing political parties have worked a lot to make up this image.”

For many years, Lebanon’s Sunni vote has been represented by the Future Movement. It won three seats in Tripoli in 2018 and five in the wider North ll region.

But in January, its leader and three-time prime minister, Saad Hariri, announced he was withdrawing from political life and called on his party not to run in the election.

Among other things, he gave as the reason Iran’s influence on Lebanon and the role of Hezbollah, the Shiite political party and armed group.

In Bab Al Tabbaneh, a Sunni-dominated and poor area of Tripoli, posters of Mr Hariri and his father Rafik, another former prime minister of Lebanon who was assassinated in 2005, can still be seen.

Now there are fears of voter apathy and low turnout in the Sunni community.

One of those who did not heed Mr Hariri’s call was Mustafa Alloush, a former MP and vice president of the Freedom Movement. He said he was motivated to run again in a bid to stop Iran-backed Hezbollah and its allies from tightening its grip on parliament.

He was unimpressed by the candidates seeking to fill the void in Tripoli. He also feared that Mr Hariri could give the impression that Sunnis should not vote, increasing the chance that more MPs would be “in the pocket of [Hezbollah leader] Hassan Nasrallah”.

“Hezbollah should not represent any Lebanese, even a Shia Lebanese,” said Mr Alloush, who is also a surgeon. “It’s not the issue of sectarianism or religion.

“This is a militia. This is an armed militia associated with Iran, with the Revolutionary Guards. So I will try, me and others, just to limit the damage that they are causing to the country.”

The dissatisfaction in Tripoli, and anger at the authorities, was demonstrated by a recent tragic incident off the coast.

A boat carrying about 60, although maybe as many as 80 men, women and children seeking to make it to Europe clashed with a Lebanese Navy ship trying to prevent it from leaving. While 47 were rescued, seven died and the rest are still missing.

Amid Dandachi was one of those on board. His wife survived but he lost his three children.

About 22 members of the Dandachi family, an influential clan in their area, are believed to have been on board.

At a meeting in a Dandachi home in Tripoli’s El Qobbeh suburb, the despair and loss has mixed with anger as the survivors seek justice against those they hold responsible for the deaths.

“I haven’t any faith in the government or justice in Lebanon,” Mr Dandachi said.

Fatima Samir was one of the young people who were active during the October revolution in Tripoli, but she now paints a damning and downbeat picture.

“I don’t want to be very frustrated, but I am sorry — this is the situation,” Ms Samir said. “We don’t believe [there will be] any change, even with the election. I’m so sorry to say that, I want to be full of hope. But this is the truth.”

Mosbah Sakat, 25, looked set to be a candidate in the election, driven by a desire to face the political system and traditional party lists. But Mr Sakat withdrew when he and colleagues were unable to form an 11-person list that they felt was “truly independent”.

Now the focus has shifted to encouraging people to get out and vote for those with links to the October revolution.

Mr Sakat says that since 2019, more people are getting involved in politics.

“We have to be active in this political situation. The future is not for the elderly, the future is for us.”