Lebanese boats protesting against Israeli plans to drill for gas in a disputed area of sea were met by patrol vessels from Israel as they neared its waters on Sunday.

Patrol boats from Lebanon were also seen in the area, AP reported.

The protest comes before a new round of talks between Lebanese and Israeli delegations, mediated by the UN and, recently, the US.

In June, the Israeli navy escorted a drilling rig operated by British company Energean to the Karish gas field, which is claimed by both countries and lies in an area of 860 square kilometres of disputed sea.

The US has released several optimistic statements hoping that the two countries can strike a compromise on the disputed energy resources.

“We welcome the consultative and open spirit of the parties to reach a final decision with the potential to yield greater stability, security and prosperity for Lebanon as well as Israel,” US State Department spokesman Ned Price said in August.

But Lebanese politicians have said the Israeli actions represent a violation of the country’s sovereignty.

Militant group Hezbollah has gone further, launching unarmed drones towards the drilling rig in July, a move condemned by prime minister-designate Najib Mikati, who called Hezbollah’s actions “unacceptable” and said the group had exposed the country to “unnecessary risks”.

Lebanon hopes to exploit offshore gas reserves as it grapples with the worst economic crisis in its modern history.

Sunday’s flotilla carried Lebanese flags and banners, with slogans in Arabic, French, and Hebrew expressing what they say is Lebanon’s right to its maritime oil and gas fields.

“We are demanding our right to every inch of our waters,” Aya Saleh, one of the protesters on a fishing boat, told AP. “And we are sending a message from the Lebanese people.”

Lebanese and Israel navy vessels were present, although there were no tensions.

Amos Hochstein, a senior adviser for energy security at the US State Department, has shuttled between Beirut and Jerusalem to mediate the talks. He was last in Beirut in late July, when he informed Lebanese officials of Israel’s response to a proposal Lebanon made in June, and signalled optimism after his trip.

Lebanese media have speculated that both countries could soon reach an agreement.

However, tensions between Iran-backed Hezbollah and Israel have remained in recent months amid the border talks. 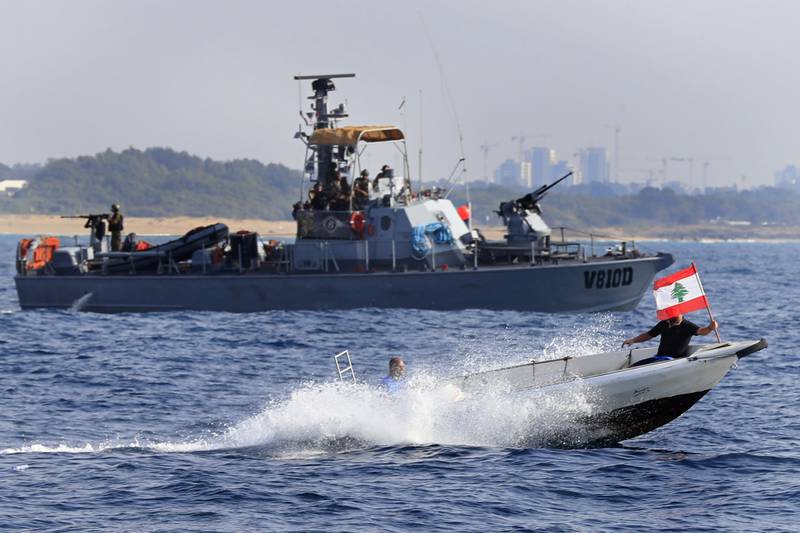