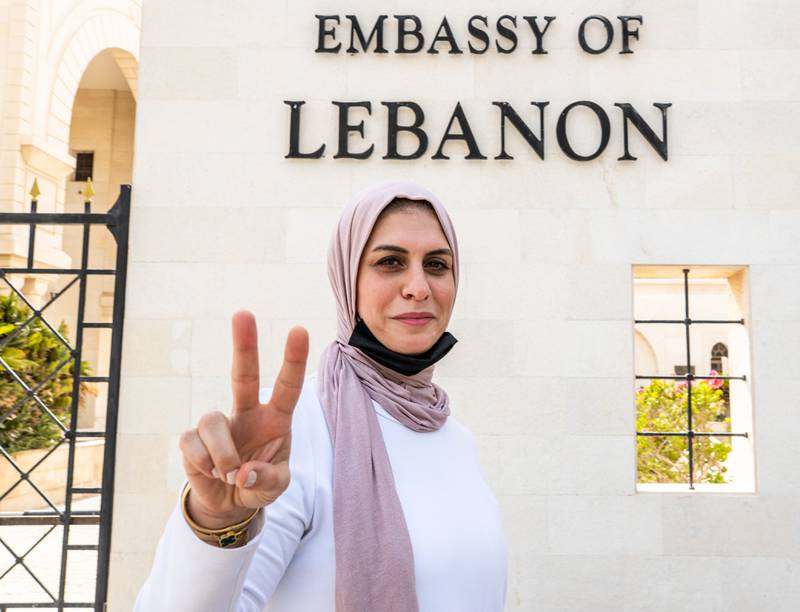 More than 225,000 Lebanese living overseas were eligible to take part in the vote that took place at diplomatic outposts and other designated venues in more than 50 countries on Friday and Sunday.

The state-run National News Agency reported that the overall turnout had been 60 per cent with the final tallies still being made.

Lebanese living in Europe turned out to vote in the greatest numbers outside of the Middle East, with 56.15 per cent casting their ballots on Sunday, while 54 per cent voted in Australia, as did 50.89 per cent of those in African nations.

In North America, the number stood at 10 per cent, while Latin America recorded 9.67 per cent.

The voting was monitored by CCTV and screens from Beirut and President Michel Aoun, Foreign Minister Abdallah Bou Habib and Interior Minister Bassam Mawlawi visited the control room at the Foreign Ministry to meet observers.

Sealed ballot boxes from around the world are now being loaded onto planes heading for Beirut to bring the physical voter slips and documentation to the Lebanese capital in time for next Sunday’s nationwide poll. The boxes will be stored at the central bank until counting begins.

The international turnout is almost three times as large as the previous poll in 2018 when overseas voting was allowed for the first time. Nearly 80,000 Lebanese registered to vote overseas in that election, of whom less than 50,000 went to the polls

Lebanon’s ambassador to the UAE Fouad Chehab Dandan told The National on Sunday that “people are taking it seriously”, with registered voters up from 8,000 in 2018 to 25,000 this year.

While civil society and opposition parties have struggled in the past to break through at the national level, experts and observers believe a large expatriate turnout could help to bring about change.

Independent groups gained prominence during protests in 2019 against the entrenched sectarian political parties that have ruled Lebanon in successive power-sharing governments since the end of the 15-year civil war in 1990.

Those protesting blamed these parties for the country’s dire economic crisis, which has wiped out savings as the Lebanese lira lost more than 90 per cent of its value against the US dollar. Shortages of food, medicine and electricity have gripped the country, forcing many to leave and seek ways to survive abroad.

“My son was studying at the American University in Beirut and last year we had to get him back to Abu Dhabi because the situation there was miserable,” Samah Al Asmar Diab, 44, who lives in the UAE, told The National. “The change is really hard but at least a step should be taken.”

The sentiment was echoed by Lebanese around the world.

Australia is among those countries with the highest number of diaspora voters, alongside Canada, the US, Germany and UAE. France has the most at about 28,000 eligible voters.

“I came today just to vote and don’t care how long we wait in the heat. We need change,” said first-time voter Christiane Daou, 37, standing in the nearly one-kilometre queue outside the consulate in Dubai.

Many expressed hope that their voices would make a difference back home, but others were concerned that ballots may be discarded or tampered with – even as officials insist this won’t be the case.

In the 2018 election, the Lebanese Association for Democratic Elections, the main elections watchdog, said it considered the results from 479 overseas polling stations “invalid” without officials giving a reason.

While the colours and flags of the traditional parties were less ubiquitous than near Lebanese polling stations on Election Day, there were still supporters coming out to vote.

Videos shared online showed voters arguing in the queues in Paris and elsewhere as fellow citizens urged those planning to back an established party to reconsider. Near the Berlin polling centre, more than 20 people chanted their backing for parliament speaker and Amal party leader Nabih Berri who has been in power for decades.