The Lebanese Forces say it is the largest Christian party in parliament for the first time — but they are not the only ones to make the claim.

Their rivals, the Hezbollah-allied Free Patriotic Movement, have long been the largest Christian bloc and say they retained the majority. The competing claims appear to set the battle lines ahead of the presidential election in October when MPs have the often contentious vote for Lebanon’s highest-ranking Christian official.

Although alliances will likely shift and settle once the new parliament convenes and begins its work, the electoral results show a lead for the Lebanese Forces, who scored 22 seats to the Free Patriotic Movement’s 18.

Ultimately, it was not the startling upset the Lebanese Forces had hoped for and with only four seats separating the two parties.

More broadly, the picture is repeated. The pro-Hezbollah parties, including Free Patriotic Movement, scored 59 seats — five short of a majority in the 128 seat cross-confessional parliament. While the pro-Hezbollah faction is a generally cohesive alliance, the groups that now make up the majority of seats are an array of parties like the Lebanese Forces, smaller factions, independents and the emerging opposition groups who gained 13 seats who have no such consensus of views. 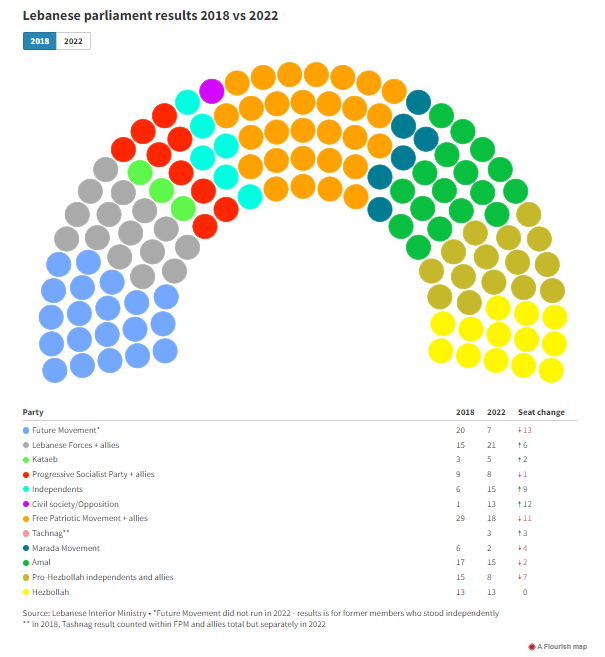 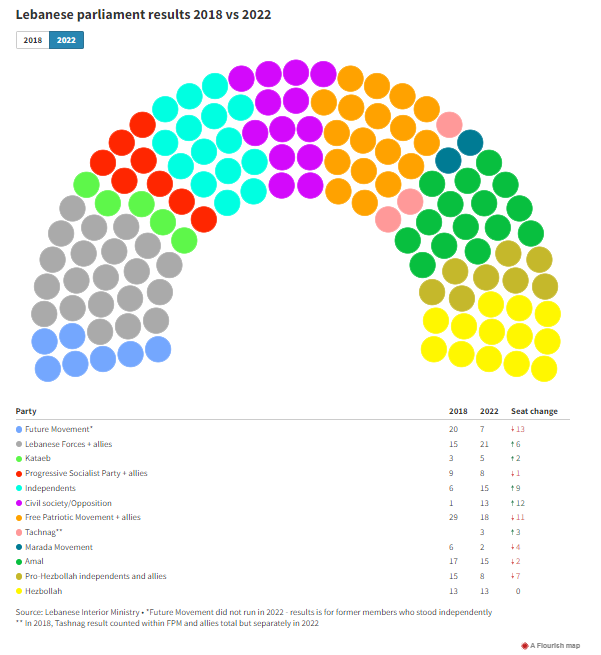 Despite the numbers appearing to show the Lebanese Forces’ marginal lead among Christian parties — and its party head Samir Geagea declaring the victory — Free Patriotic Movement head Gebran Bassil also said they had remained the largest Christian bloc. However, he said there were more important things to work on than squabbling about winners and losers.

“The truth is that today is not the time to flex about who has the majority,” he said. “It’s time to work hard and get results to fix the country.”

While the Iran-backed Hezbollah and its allies, of which the Free Patriotic Movement is a major partner, suffered losses compared to the 2018 elections, the most startling development was the unprecedented 12 seats won by civil society opposition groups.

But experts warn the new opposition MPs could be caught between the two main political blocs, Iran-backed Hezbollah and the pro-Western, Gulf-friendly Lebanese Forces.

Mr Bassil issued a challenge to the new opposition MPs, many of whom campaigned as an alternative to Lebanon’s entrenched political class largely made up of holdovers from the civil war and who have dominated politics in the 32 years since.

“These new independent — civil society, whatever you call them — this is an opportunity for them to prove themselves. It’s not only about protesting in the streets and talking to the media. There is real legislative and parliamentary action that needs to be taken, so we’ll see how they do.”

He too denied the loss, confident that civil society MPs would join the Free Patriotic Movement and its allies and turn the tables.

“If they mean what they said during the revolution,” he explained of the opposition groups. “I’m sure they will be on our side.”

The opposition upsurge is born out of the mass uprisings that ignited across Lebanon in late 2019. As the first signs of the economic collapse became apparent, so did Lebanese anger against the country’s political elite.

In 2020, the US sanctioned Mr Bassil under the Magnitsky Act for corruption that has “helped erode the foundation of an effective government that serves the Lebanese people.”

A stand-off between ‘two sides of the same regime’?

Wissam Laham, a constitutional expert and political science professor at the University of St Joseph, said that ultimately it doesn’t matter who won the majority of Christian seats.

“They are all part of the same political regime” that ran the country in the years before the crisis, he said. Indeed both the Lebanese Forces and Free Patriotic Movement have been in successive parliaments and cabinets.

“Even if the Free Patriotic Movement lost a few seats, they didn’t lose them to a new political party that opposes the current regime. They lost them to the Lebanese Forces, another radical party from the same political regime.”

Lebanon continues to reel from an economic collapse the World Bank has described as one of the worst in the modern world.

The bankrupt nation’s rapid decline has been defined by severe shortages of food, medicine and fuel. The national currency has plummeted in value and inflation is extremely high. Meanwhile, the poverty rate is nearly at 80 per cent, according to the UN.

The new parliament will be tasked with appointing a new prime minister, who must then form a cabinet that passes the parliament’s vote of confidence — often a months-long endeavour, even if one bloc or faction has a majority.

And with President Michel Aoun’s term expiring in October, Mr Lahham and other experts anticipate a possible parliamentary deadlock over electing a successor.

It took MPs 29 months to agree to elect Mr Aoun after the end of Tammam Salam’s term in 2014.

As the highest Christian position in the country, the battle between the Lebanese Forces and Free Patriotic Movement over who represents the sect may well be a foreshadowing of things to come.