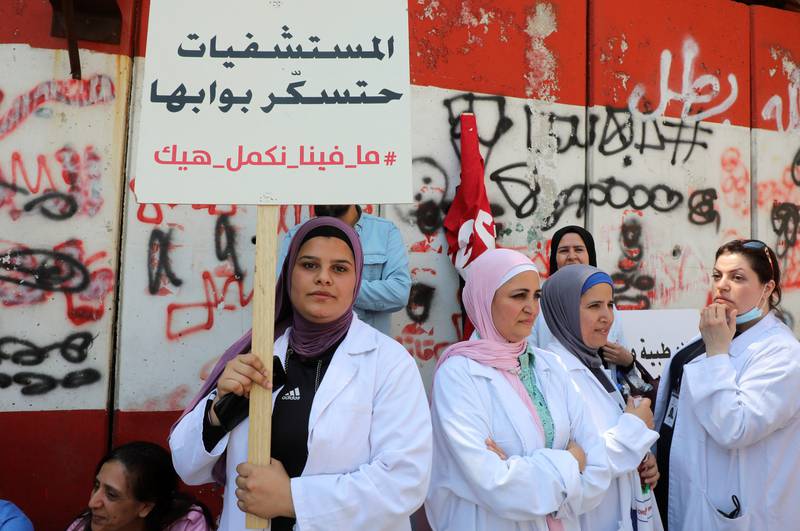 An altercation between a hospital director and a nurse on strike over unpaid wages highlighted the deep challenges faced by medical staff in Lebanon’s once-prized hospitals.

Salaries barely cover transport cost to and from work. Hospitals cannot obtain their funds stuck in banks and are threatening to request payment in cash only. Thousands of employees are believed to have left to work abroad since the start of Lebanon’s worst-ever economic crisis in 2019.

“The shortage in health human resources is the most pressing issue,” Mr Abiad said. “Those who have stayed have now double the workload, resulting in an increase in the physical and mental stress bearing down on them.”

“With the sharply falling value of their wages, healthcare workers are being driven into burnout and despair”, he added, saying that the health sector was a “a bomb waiting to explode.”

The latest dispute to make headlines occurred in late May in the town of Bint Jbeil at the southern tip of the country between medical staff as they tried to block the main entrance to a government hospital and the institution’s director.

It spurred an angry reaction from labour unions in public hospitals across the country. Some employees organised on Thursday a one-hour strike in support of the nurse at the centre of the altercation, Fatima Yahya.

Speaking at Lebanon’s largest public hospital near Beirut, the head of Lebanon’s general labour union, Bechara Al Asmar, accused the Bint Jbeil hospital’s director, Toufic Faraj, of being a “dictator”. Mr Al Asmar said the union would “escalate” its actions if there was no accountability.

The Health Ministry said that it had opened an investigation into the incident. Labour union representatives told The National that its results were transferred last week to Lebanon’s central inspection board, and that the board had summoned Mrs Yahya and Mr Faraj to give their deposition on Wednesday. Its president George Attieh did not respond to a request for comment.

At the heart of the matter lies a deep feeling of under-appreciation among Lebanon’s medical staff, particularly in the public sector. Their situation is similar to other state employees, including soldiers or teachers.

Despite the dramatic depreciation of the local currency since 2019, their salaries remain the same outside of a small increase in transport allowances and some punctual and limited government assistance. A nurse now makes roughly $70 a month. Meanwhile, inflation continues to soar, reaching 206 per cent in April. Transport costs rose by 492 per cent.

“The most important thing is that they don’t appreciate us, do you understand me? I worked hard during Covid-19 and couldn’t see my two children for six months,” said Mrs Yahya, 37.

Lebanon’s health sector used to be one of the best in the region. Patients would flock to Lebanon for medical treatment at the hands of doctors, who were often trained in top European or American universities.

Yet researchers such as Fahad Al Sudaid have said that even before the Lebanese financial collapse, Lebanon’s 29 public hospitals, and particularly its nurses, were undervalued and underfunded.

The Health Ministry would lavish “resources on privately-owned entities at the expense of its own infrastructure,” wrote Mr Al Sudaid in a report published by Lebanese think tank, Synaps, last year.

Today, public hospitals are bearing the brunt of the economic crisis, which has caused shortages of medical supplies. Private hospitals also suffer from the fluctuating exchange rate and restricted access to their bank accounts. Doctors and hospital workers held a two-day strike last week throughout Lebanon.

“My salary is just enough for fuel for my car,” Mrs Yahya said. “All employees in hospitals in Lebanon are suffering, burnt out and oppressed. We’ve arrived at a stage of being beaten up. It’s very difficult.”

Mrs Yahya and Mr Faraj disagree on most of the reasons behind the sit-in that led to their altercation. She said that the hospital has not paid arrears of 23 million Lebanese pounds ($821) that she is owed since 2017. Mr Faraj says this is untrue.

She also said that the hospital never delivered on the promise of paying her an extra 1.5 million Lebanese ($53) pounds for difficult working conditions during the pandemic. Mr Faraj acknowledged delays from the Finance Ministry in this case, but said it was a “social aid” for all state employees.

“We are for the right of people to protest but not to stop sick people from entering the hospital,” he said.

Mr Faraj’s main point of contention with Mrs Yahya was for blocking the hospital’s entrance, despite her affirmation that several other doors were available. In a moment that was largely shared on social media, the two clashed as he tried to force his way past her. She stayed put and asked onlookers to film her.

Becoming visibly more agitated, Mr Faraj seized a wooden stick that was lying on the ground. For a split second, he seemed to gesture towards Mrs Yahya in a menacing way as she screamed: “I want my rights.” Fists clenched, she told him that he should be ashamed, but stepped aside and let him through. He walked away, stick still in hand, holding it towards the ground.

Mr Faraj forwarded a statement, which was signed by Bint Jbeil hospital employees, in support of him. “I have 120 employees and those protesting were no more than 15,” he said.

Mr Abiad, the minister, said that he believed that Bint Jbeil hospital employees had received their dues. “As for any backward effects (arrears), they were being paid in instalments,” he said.

Unions remain unconvinced. “What happened was really ugly,” Khalil Kain, a union member who works in the government hospital of the coastal town of Saida, told The National. “Fatima was subject to physical and emotional abuse.”

Mr Abiad remained evasive when asked what solutions he was working on for Lebanon’s health sector. “There are projects,” he said, “but too early to reach a conclusion.” Last month, he used an appearance at the World Health Assembly in Geneva to call for international help.