Lebanese politicians failed for a third time to elect the country’s next president on Thursday with no candidate receiving enough votes, only 11 days before the term of incumbent Michel Aoun ends.

Parliamentary speaker Nabih Berri said the next election session in the 128-seat chamber would take place on Monday. In the first polling round, which took place in late September, a two-thirds majority was required to win. But an absolute majority is needed in subsequent votes.

Of the 119 votes cast, 55 were blank and 17 for “New Lebanon”. MP Michel Moawad,  who received the most votes in the first round with 36, increased his share to 42 — but that was nowhere near the threshold needed to be elected Lebanon’s next president.

“It is clear that one camp comes to elect a president while another attends the sessions just to hide its desire to block them,” said Mr Moawad, a staunch critic of the Iran-backed armed group and political party Hezbollah.

Mr Moawad, whose father Rene served as president for 18 days in 1989 before being assassinated, described himself as the only “serious candidate”.

He has received the support of parliament’s largest party, the Lebanese Forces, the Kataeb Party, the Druze Progressive Socialist Party and a handful of independent MPs.

Among the big names not to back a candidate yet are Hezbollah, Mr Berri’s Amal Movement, and the Free Patriotic Movement, which was founded by Mr Aoun.

The election rules require a two-thirds quorum, which means no one bloc can impose its candidate. The second parliamentary session last week was abandoned because of a lack of quorum.

The failure to find a successor to Mr Aoun, an 89-year-old former army commander, is not unexpected and has precedent — it took 46 sessions and 29 months for parliament to elect him in 2016.

In the country’s confessional system, the presidency is always reserved for a Maronite Christian.

If parliament fails to decide on Mr Aoun’s successor before his term ends, the government will assume presidential powers.

However, the government itself is in a caretaker capacity, adding to the political paralysis. Najib Mikati was named prime minister-designate in June, a month after parliamentary elections, but political factions have yet to agree on the distribution of portfolios in his Cabinet.

There are fears that any further paralysis will further delay the implementation of reforms that Lebanon needs to help get it out of a crippling financial crisis which has been described by the World Bank as one of the worst in modern history.

The local currency has fallen in value by more than 95 per cent over the past three years and there are severe shortages  of basic commodities such as bread, water, electricity and medicines. 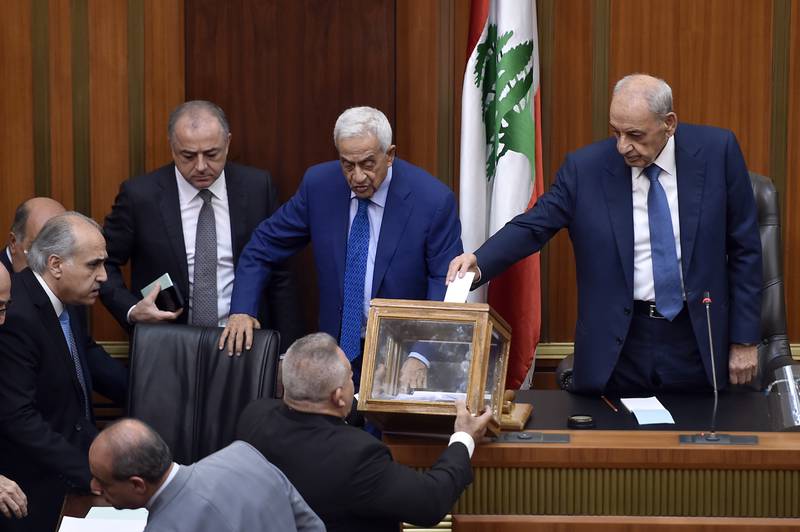