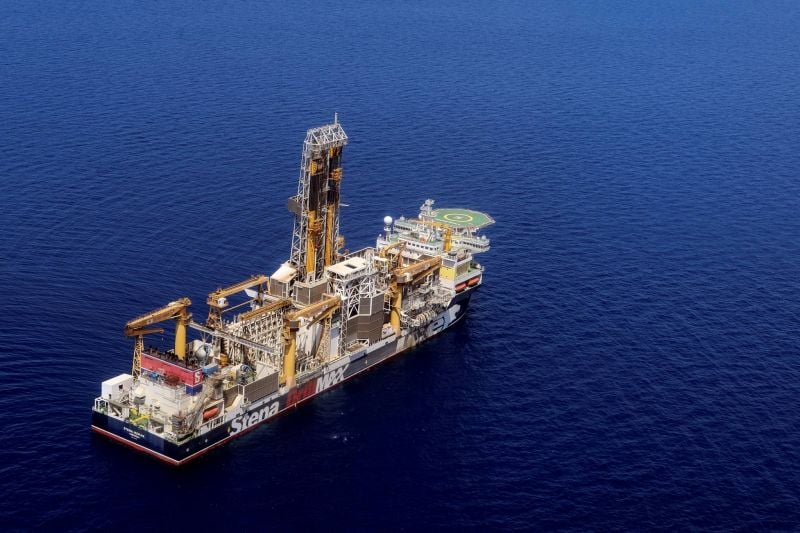 Caretaker Prime Minister Najib Mikati and President Michel Aoun on Sunday slammed Israel after a floating production, storage and offloading unit from the Energean Power company arrived at part of Israel’s disputed exclusive economic zone with Lebanon to begin exploiting the Karish gas field.The unit should enable Israel to obtain its first gas deliveries by the third quarter of 2022 according to the specialized site “Offshore Energy.” In a statement Sunday afternoon, Aoun said any work done by Israel in the disputed area would be considered a “provocation and hostile act,” while Mikati warned that the sudden move “could create tensions, the repercussions of which no one can foresee.” The unilateral act occurs amid suspended negotiations between the two countries due to a dispute regarding the Karish field, which Lebanese negotiators say partly encompasses Lebanese territory. Several of Lebanon’s new opposition MPs criticized Israel’s encroachment on the disputed area, blaming Aoun and others for allowing it, and announced that they will discuss this file during a press conference on Monday. In other border violations news, the Israeli armed forces broke the technical barrier  for a second consecutive day in South Lebanon on Saturday. However, the Blue Line, which serves as the border between the two countries, was not crossed. Border violations and security incidents are frequent in this area. Two days prior, a Lebanese shepherd was abducted  by the Israeli army south of the village of Shebaa and taken to Israeli territory.

Lebanon’s central bank governor and his brother are suing the state  over what they say were “grave mistakes” made by a public prosecutor in his investigation into whether the duo had embezzled public funds, according to a copy of the lawsuit obtained by Reuters. The claim by Riad and Raja Salameh has fueled concerns that the public probe into their alleged financial misconduct could stall, after similar lawsuits effectively paralyzed an investigation into the 2020 Beirut port blast. Public prosecutor Jean Tannous has been investigating allegations of embezzlement and other crimes in which least $300 million were misused. The brothers have denied the accusations. Their lawsuit claims that Tannous’s attempt to obtain account information from commercial banks violated banking secrecy laws and accuses Tannous of circumventing official channels to coordinate directly with judiciaries abroad on the probe. Riad Salameh is facing judicial probes in at least five   European jurisdictions over allegations of financial misconduct. Nizar Saghieh, the head of rights watchdog Legal Agenda, told Reuters that the lawsuit could “freeze the case indefinitely” as it was filed to a public court whose members are as yet unnamed. On May 26, Mount Lebanon Prosecuting Judge Arlette Tabet issued a decision to postpone Riad Salameh’s hearing until December.

President of the Beirut Bar Association Nader Gaspard announced on Saturday that representatives of the liberal professions had suspended discussions  about depositors’ rights with the Association of Banks in Lebanon. The talks had been launched in an attempt to reach an agreement on the return of deposits, including those of professional organizations, which have been held hostage in commercial banks due to ad hoc restrictions imposed since the onset of the country’s financial crisis in 2019. In March, representatives of these independent and freelance professions had asked the government to “hold the governor of the Banque du Liban accountable” and invited the CEOs of banking institutions to a final meeting, before undertaking legal action. The statement about the suspension was issued on the sidelines of a meeting with caretaker Prime Minister Najib Mikati, which also included members of the Commission for the Protection of Depositors’ Rights, formed last December under the auspices of the Bar Association in an attempt to strengthen the legal means to enforce these rights. Mikati expressed his support for the liberal professions’ position and the need to share the losses by prioritizing responsibilities. On Friday, ABL Secretary-General Fadi Khalaf suggested the transfer of 20 percent of any future income from the oil and gas sector to a Special Purpose Vehicle that would be used to repay depositors . Khalaf had also said that the government’s economic recovery plan  to write off 75 percent of the deposits to cover $60 billion of losses at the central bank — which is a responsibility that lies with the government — and introduce a state guarantee for amounts up to $100,000, will not be accepted either by depositors or banks.