As Lebanese voters headed to the polls on Sunday, supporters of former prime minister Saad Hariri instead gathered for a pool party in Beirut’s streets.

The Sunni leader announced this year that he would not contest the election or put forward any Future Movement candidates for Parliament and called on his supporters to follow by boycotting the vote.

In Beirut’s Sunni stronghold of Tareeq Al Jadideh, the roads shut down and a large yellow inflatable pool was set up. Adults and children splashed in the water while residents sat and watched. 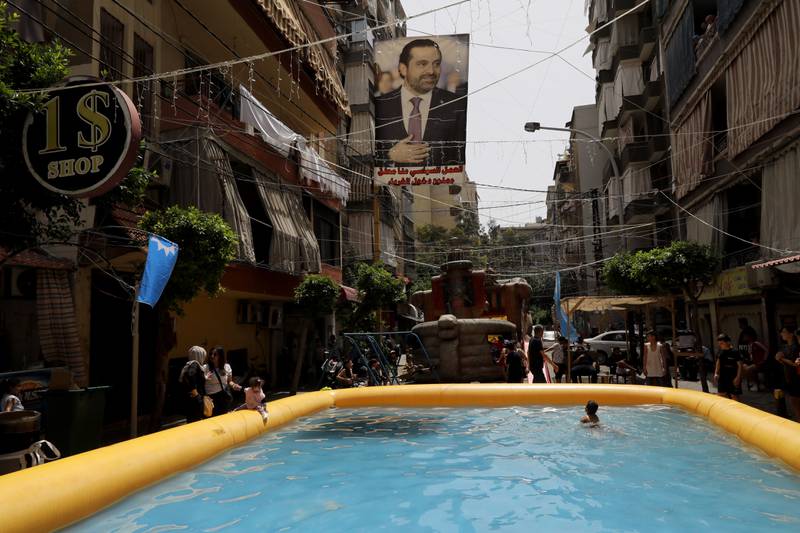 “We are abiding by the boycott,” said Hariri supporter Mohamed Berjawi. “We are his family. Although I am older than him, I consider him like my father [and] my father told me to boycott … Who am I going to vote for, with my respect to all … I belong to Future Movement and the Future Movement is not taking part in the vote, which means we are boycotting.”

Rabih El Omari told local newspaper L’Orient Today that “because we feel it is the same result whether we vote or not”.

He said it was clear who was running the country in an apparent reference to Hezbollah and its allies and they wanted to discredit the process by ensuring “a low turnout within the Sunni sect”.

“The pool is to show that it is not an election day for us,” he told the paper.

Some said the boycott may help Hezbollah’s Sunni allies to win more seats, but those supporters of the Future Movement on the streets of Beirut on Sunday were undeterred.

And they are not alone in turning away from the democratic process.

Nationwide turnout in the election was low, with only about 32 per cent of registered voters casting their ballots by 5pm, according to the Interior Ministry. The 2018 turnout was 48 per cent.