Ukraine has doubled down on accusations that Russia is smuggling stolen grain to the Middle East, a day after Lebanon’s top prosecutor lifted the seizure of a ship accused of carrying stolen flour and barley.

The Laodicea has been docket in Lebanon’s Tripoli port since last week, as investigations were carried out to determine whether the grain was stolen. Despite the order to release the vessel by prosecutor Ghassan Oueidat, the ship remains anchored in Tripoli due to a second edict of seizure by a Tripoli judge.

“There is very strong evidence that the grain and flour on board the Laodicea is stolen from Ukraine,” Ihor Ostash, Ukrainian ambassador to Lebanon, told a press conference on Wednesday.

Mr Ostash said Ukraine’s general prosecutor had documented 78 ships that were used for transporting stolen grain to the Middle East from what Ukraine considers to be the Russian-occupied territory of Crimea.

“Around 500,000 tonnes of Ukrainian grains were stolen from occupied Ukrainian territory and transferred to mostly Crimea [for export],” he said.

At the press conference Mr Ostash’s team displayed photographs and documents of the original ship statement and cargo manifest, in an attempt to counter Russian claims that the Laodicea originated in the port of Kavkaz in Russia.

“Did the Russians show you any documentation proving that the ship came out of Kavkaz?” he asked. “Of course not — because it is impossible.”

The Ukrainian embassy in Lebanon proposed a solution to the problem of the seized Laodicea in a tweet published on Tuesday.

The tweet said Ukraine had offered to sell the flour and barley aboard the ship for half their market value.

The offer was made to “avoid corruption of the stolen grain and in order to keep it in Lebanon”.

Lebanon, in the throes of a prolonged economic crisis now in its fourth year, is badly in need of wheat and flour. The financial collapse has led to a plunge in the value of the local currency, resulting in difficulties in maintaining bread subsidiesfor an impoverished population.

Lebanon was reliant on Ukraine for about 60 per cent of its wheat. But the Russian invasion of Ukraine and subsequent blockade of Black Sea ports has disrupted regular grain shipments to Lebanon and caused a global supply shortage.

It was not immediately clear whether the Lebanese government would accept Ukraine’s offer. 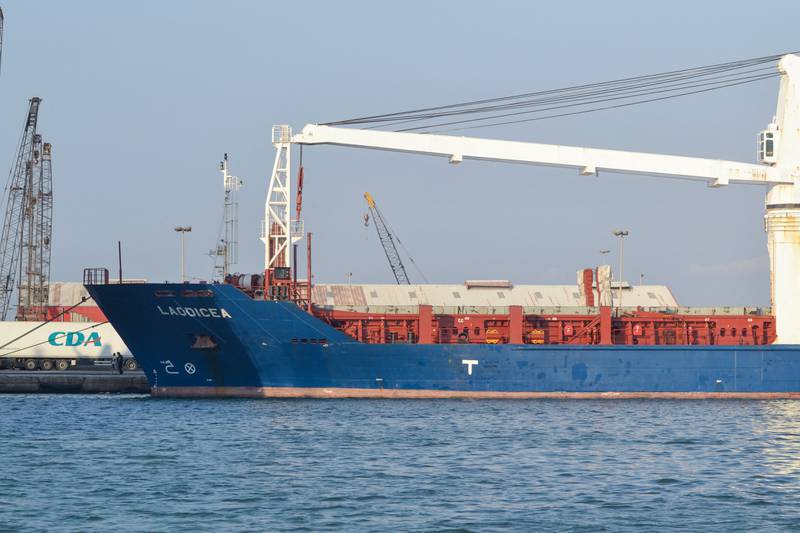