A cargo ship carrying 26,000 tonnes of Ukrainian corn left the port of Odesa early on Monday, in the first such voyage since a deal was signed to reopen a vital shipping lane in the Black Sea.

The Razoni is bound for Lebanon, one of the countries in need of Ukrainian grain, and another 16 ships are waiting to help ease a global food crisis.

The UN said millions of people were on the brink of severe hunger because of the blockage, with more circuitous routes by road and rail   proving only partially satisfactory.

UN Secretary-General Antonio Guterres said the cargo was carrying “two commodities in short supply … corn and hope”, and that the grain shipments “bring much-needed stability and relief to global food security, especially in the most fragile humanitarian contexts.”

Ukrainian Foreign Minister Dmytro Kuleba called it a “day of relief for the world, especially for our friends in the Middle East, Asia and Africa, as the first Ukrainian grain leaves Odesa after months of Russian blockade”.

Western diplomats said they were watching closely to see whether Russia  upholds its promises to the UN and Turkey that it will facilitate safe passage of the grain, which were called into doubt when missiles hit Odesa after the deal was signed.

“These ships must receive safe passage. There must be no repeat of Russia’s shelling of the port of Odesa,” said UK Foreign Secretary Liz Truss. “”Russia has felt the full weight of global pressure and the eyes of the whole world will now be watching.”

Turkey said the ship was due to arrive in Istanbul on Tuesday, where it will be boarded for inspections under the terms of the deal. Officials have set up a co-ordination centre in the city as part of the agreement.

Mevlut Cavusoglu, Turkey’s Foreign Minister, said he hoped the shipments would “continue without interruptions and problems… we hope that the agreement will lead to a ceasefire and lasting peace”.

But the restart was marred by the death of a Ukrainian agricultural tycoon, Oleksiy Vadatursky, who was killed in a missile strike on Mykolaiv on Sunday.

“It is exactly such people, such companies, our Ukrainian south that have guaranteed the world’s food security. It has always been so. And it will be so again,” President Volodymyr Zelenskyy said.

Ukraine and Russia, two of the world’s biggest agricultural exporters, blame each other for food exports grinding to a standstill during the five-month war.

Moscow is accused by western powers of bombarding grain warehouses.

Ukraine wants to generate revenue from exports just as much as other countries, such as Lebanon, want the imports, with Kyiv predicting that it could gain about $1 billion in foreign exchange from unblocking the ports of Odesa, Chornomorsk and Pivdenny.

The Turkish Defence Ministry said that the shipment would arrive in Lebanon within days. The Razoni sails under the flag of Sierra Leone.

“The ship Razoni has left the port of Odesa bound for Tripoli in Lebanon,” the Turkish ministry said in a statement. “It is expected in Istanbul on August 2. It will then continue its journey after it has been inspected in Istanbul.”

Lebanon is facing a major wheat shortage as the government struggles to cover subsidies for importers to buy grain on international markets because of the rising price and the country’s four-year economic crisis.

Other vessels will follow, respecting the maritime corridor and the formalities in line with the agreement reached with Russia on July 22, the defence ministry said.

Turkey opened a co-ordination centre in Istanbul on Wednesday to monitor the exports. The centre is staffed by civilian and military officials from the two warring parties and delegates from Turkey and the UN.

along established routes and looking for banned weapons on the way into and out of the Black Sea.

The drop in deliveries from two of the world’s biggest grain exporters is contributing to a surge in prices that makes food imports prohibitively expensive for some of the world’s poorest countries.

The UN estimates that nearly 50 million people are facing acute hunger as a direct consequence of the war that broke out after Russian forces entered Ukraine on February 24. 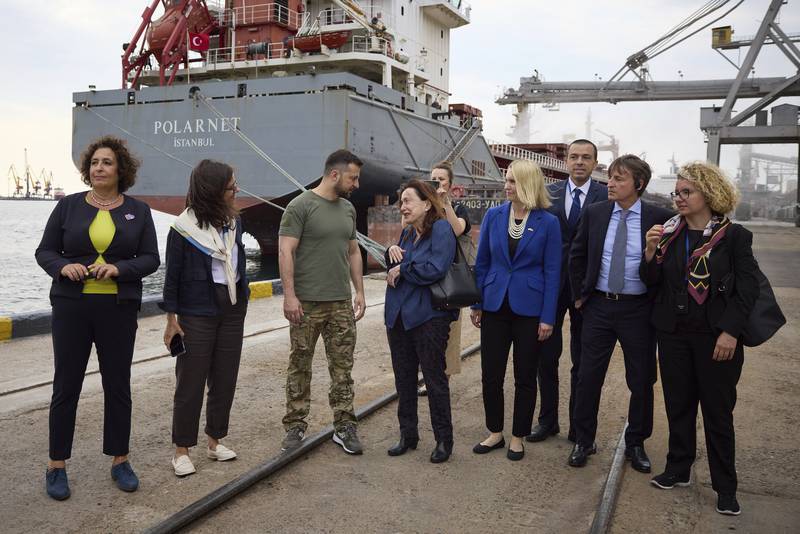 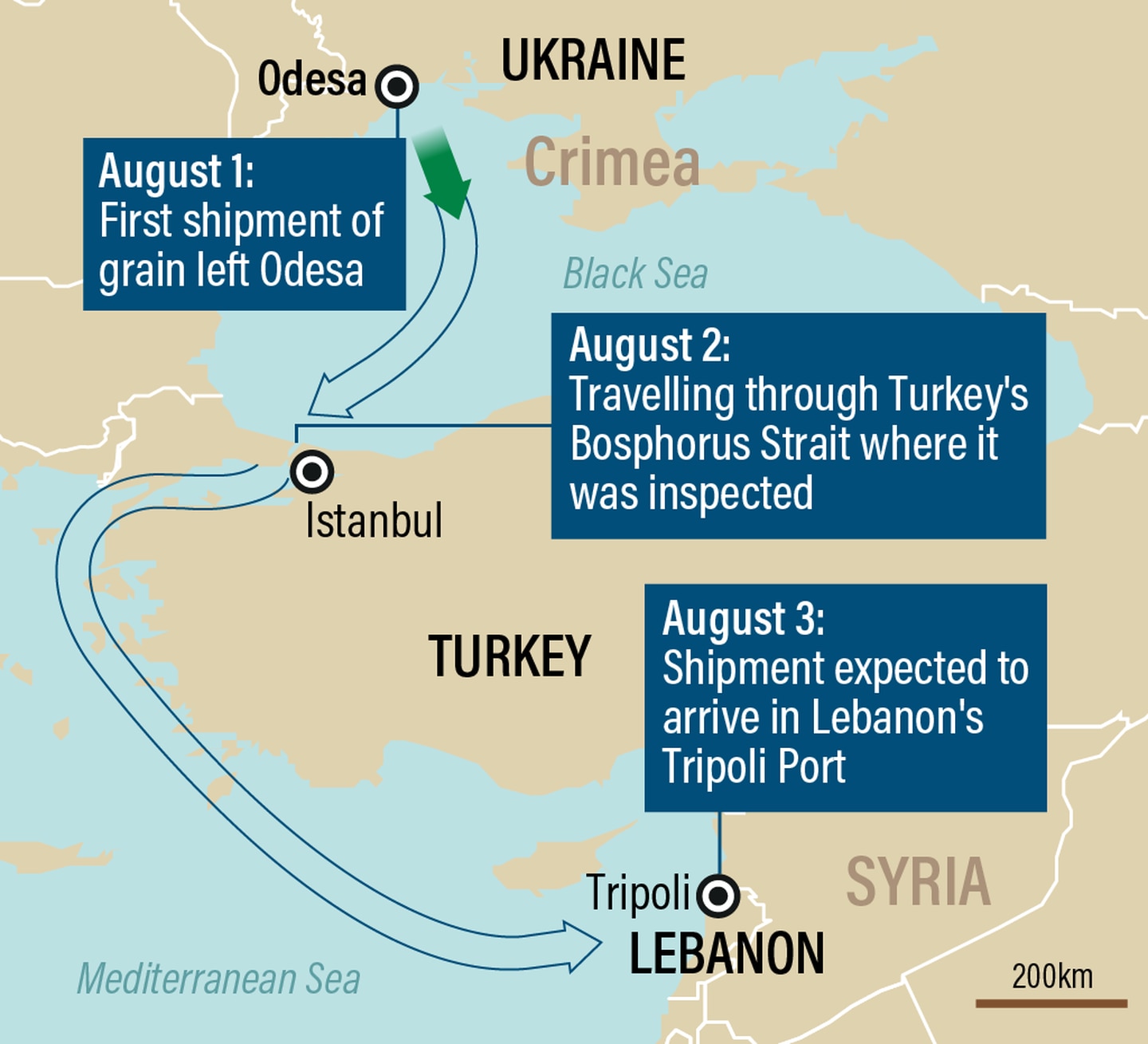 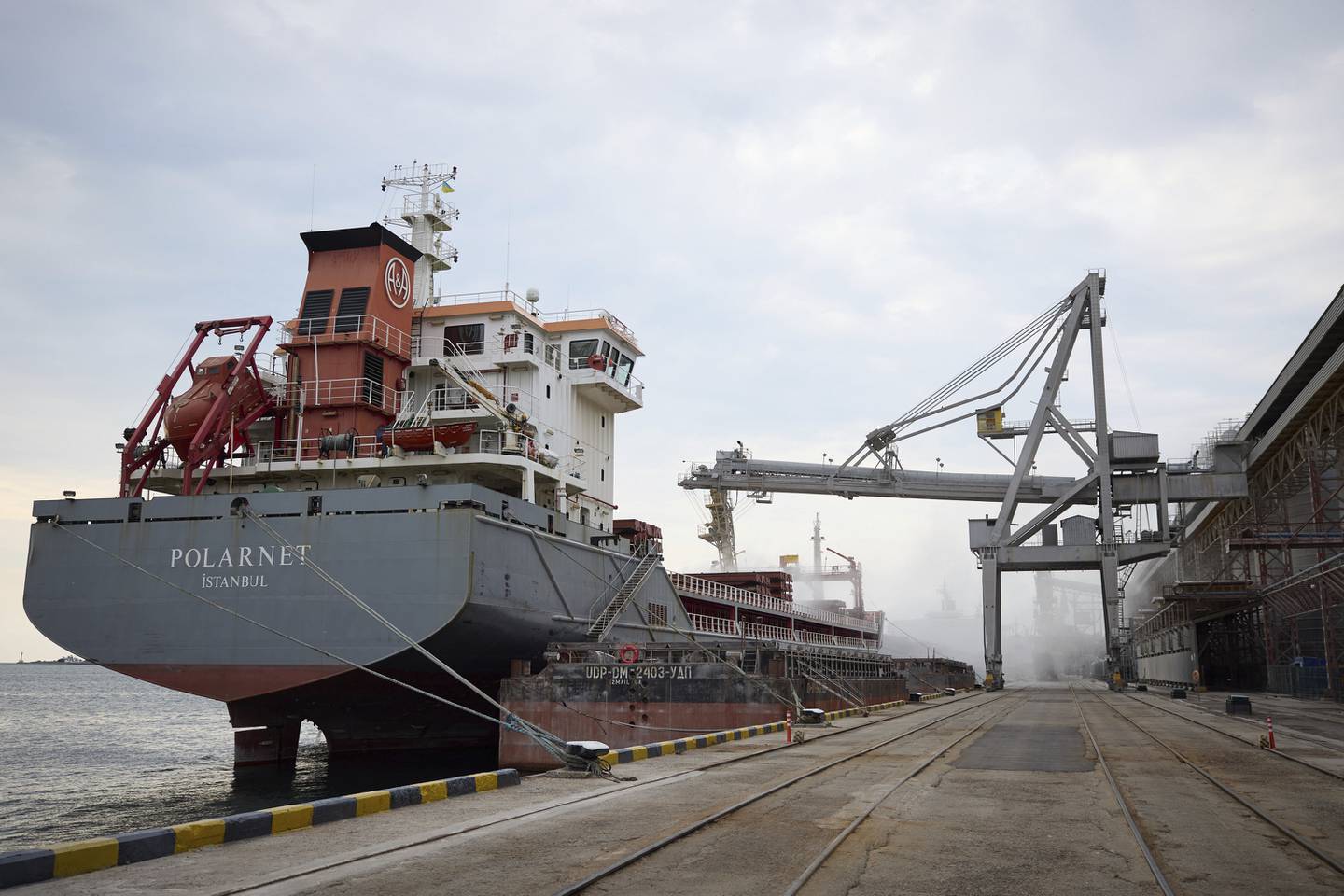