A US energy envoy mediating indirect maritime border talks  between Lebanon and Israel said he was “optimistic” that a deal was within reach after meeting Lebanese officials on Monday.

Amos Hochstein was last in Beirut in June during an escalation in tensions when Israel moved a vessel close to the Karish gasfield, which Lebanon partially claims. Israel insists that Karish, which is about 80 kilometres west of Haifa, is within its exclusive economic zone.

“I remain optimistic that we can make continuous progress as we have over the last several weeks and I look forward to coming back to the region and being able to make the final arrangements,” Mr Hochstein said after meeting Lebanese President Michael Aoun, prime minister-designate Najib Mikati and parliamentary speaker Nabih Berri.

Lebanon’s deputy speaker said the talks were now moving “within a short timeframe.”

“The atmosphere was positive. Everyone came out of the meeting satisfied and, God willing, over the next few weeks we will begin to see results,” Elias Bou Saab said the meeting with Hochstein.

Before the meeting, Mr Aoun said Lebanon was seeking “a deal that preserves its rights and its wealth and that could provide, as soon as negotiations are over, an opportunity to revitalise the economy”,

Mr Hochstein was in receipt of an Israeli offer on how to demarcate the maritime boundaries between the two countries, who do not recognise each other.

Karish was first discovered more than a decade ago and the US-mediated talks — which began in 2020 — had made little progress. They were effectively on hold until June when Mr Hochstein landed in Beirut.

In the negotiations, Lebanon had initially requested 860 square kilometres of territory in the disputed area.

But the talks were complicated last year when Beirut expanded its claim in the zone by about 1,400 sq km, which includes part of Karish.

Further complicating matters is the presence of Iran-backed Hezbollah, the political party and heavily armed group that is an arch-foe of Israel.

Hezbollah chief Hassan Nashrallah  has repeatedly threatened military action against Israel over the maritime dispute. On Sunday, he said Hezbollah would wait to see the results of Mr Hochstein’s visit before deciding “how to behave”.

Lebanon is in desperate need of the potential financial and energy rewards that a deal could offer.

An economic collapse that first became apparent in 2019 has plunged much of the population into poverty and the local currency to lose more than 90 per cent of its value. There are widespread shortages in basic supplies including electricity, water, medicines and bread. 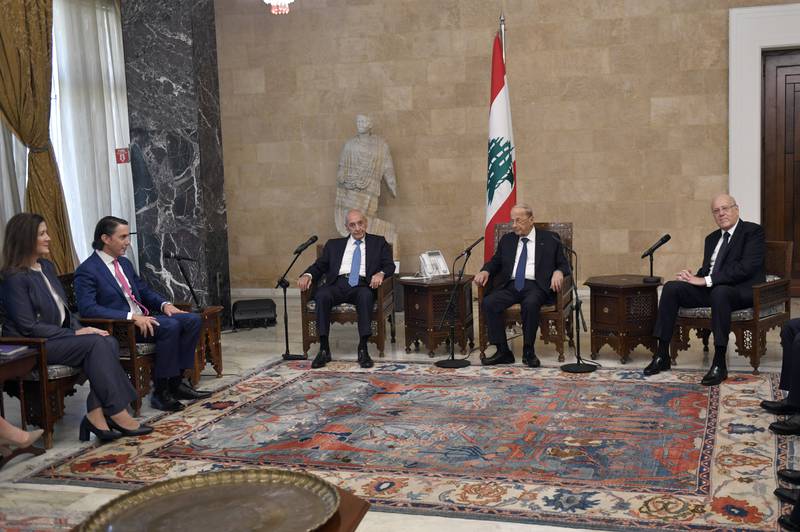