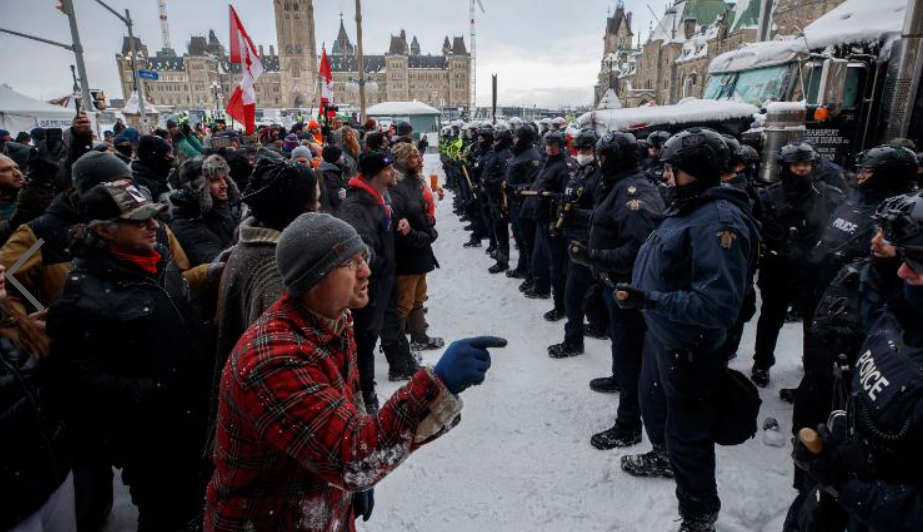 (CNN)Another weekend of protests against Canada’s Covid-19 mandates saw around 200 arrests in the nation’s capital as authorities moved to end the weekslong demonstration, towing vehicles and going after protesters’ pocketbooks with financial penalties.

Police said they employed pepper spray and escalated tactics over the weekend to disperse crowds and make arrests with protesters gathered in front of the Parliament building. 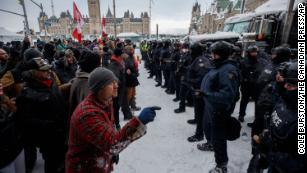 Canadian authorities freeze financial assets for those involved in ongoing protests in Ottawa
Some of those arrests included protesters who allegedly had smoke grenades and fireworks, and were wearing body armor, police said.
Ontario’s Special Investigation Unit is also reviewing an incident where a woman was reportedly seriously injured after an interaction with a police officer on a horse, and a second where an officer discharged a less-than-lethal firearm at protesters.
Ottawa Interim Police Chief Steve Bell told a news conference Sunday police operations had seen a dramatic decline in the number of protesters.
But he said downtown residents had woken to fencing and a “very heavy police presence” as well as checkpoints throughout the city.
“While I know that everyone is pleased to see many of the unlawful protesters are gone, this is not the normal state of our city,” he said. “Despite the successes of the past few days, we still require these measures to prevent unlawful protesters from returning.” 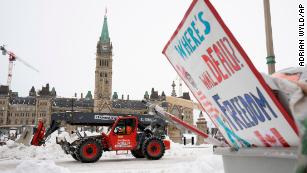 Machinery moves a concrete barricade past the Parliament buildings while a protest sign sits in a garbage container in Ottawa on Sunday, February 20.
Bell said 191 protesters had been arrested and 107 people charged. Charges included obstructing police, disobeying a court order, assault, mischief, possessing a weapon and assaulting a police officer, he said.
Chris Harkins, deputy commissioner of the Ontario Provincial Police reported at the news conference 76 vehicles had been seized and towed.
The Ottawa protests were started in late January by a group of truck drivers opposed to a Covid-19 vaccine and testing mandate. But others outside the trucking industry have joined to express their frustration with an array of other Covid-19 health measures, such as requirements to wear masks in schools.
Officials vowed to end the protests through unprecedented protocols, including the Emergencies Act. The law allows the Canadian government to tap into military forces, but Prime Minister Justin Trudeau has made it clear troops will not be needed.
Although Ottawa’s streets were calm, quiet and free of protesters Monday, Trudeau defended invoking the Emergencies Act, saying the situation remains “fragile.”
“Right now, when the situation is still of people pre-positioning, people being out there indicating that they are ready to blockade, to continue their illegal occupations, to disrupt Canadians’ lives, we feel that this measure needs to remain in place while this emergency situation is still in place,” Trudeau said at a news conference on Parliament Hill on Monday.
Canada’s House of Commons passed a motion to approve the Emergencies Act and the sweeping powers it enables Monday evening, with Canada’s New Democratic Party voting with the Liberal government to ensure the law could remain in place until mid-March.
The government will rescind the emergency powers as soon as national security allows, Trudeau said.
The Canadian Civil Liberties Association is mounting a legal challenge to the government’s extraordinary, but temporary measures in the Emergencies Act, saying they “seriously infringe” on the rights of Canadians.