A banner for NBA All-Star Game hangs on City Hall, on Sunday, February 20, 2022. Mayor Justin Bibb’s administration says a planned shake-up never went into effect for the city office that handles coordination for special events, such as the All-Star Game, the 2016 Republican National Convention, and more routine things like filming and parades. 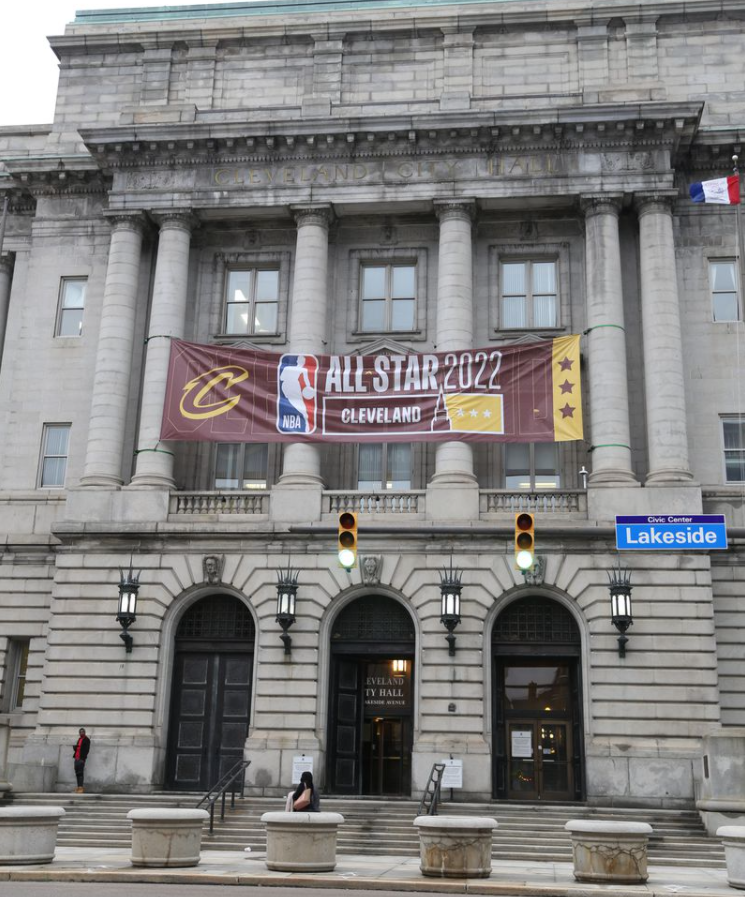 The result: Cleveland’s special events coordination is more or less being conducted the way it was prior to December, but Bibb does intend to add two more staff members to help handle permits and other city hoops that event planners must jump through.

Part of Bibb’s aim in reverting to the old system is cost savings, according to city spokeswoman Sarah Johnson.

Bibb’s budget calls for spending less than half of the roughly $800,000 that Jackson’s administration intended to spend on the new division. And Bibb plans on staffing the department with four employees, down from the seven or eight workers Jackson wanted, but an increase over the two people currently handling duties.

Jackson’s former Public Works Director Michael Cox, now Bibb’s interim public works director, told council last year that part of Jackson’s reason for wanting more staff and a larger division was to streamline and improve the event planning process. Johnson has yet to respond to questions about whether Bibb’s events office would still try to streamline operations, despite its smaller staff.

Jackson’s plan also would’ve made the head of special events a commissioner, who, once appointed, would not have been able to be removed from the job due to civil service protections.

Said Griffin: “The [Bibb] administration indicated that it did not seem prudent to move forward on an $800,000 new expenditure without additional information and thorough review of [the] rationale behind creating a new Commission with new classified civil service positions.

To create new subsections of city government and abolish old ones, Cleveland’s charter requires the Board of Control, comprised of members of the mayor’s administration, to sign off on Council’s approval of the restructuring.

So, “the new division never came into existence,” Griffin said.

Johnson and Griffin both said that Bibb may revisit Jackson’s plan in the future.

Several council members, in considering Jackson’s plan last year, questioned the need for a new division, and the creation of a new civil-service-protected commissioner. It took months for council to pass the plan, and even then, four members voted against it.

The topic of reverting back to the old structure of the office came up this week, as City Council members were vetting the 2022 budget of the Department of Public Works, where special events coordination is housed.

Some council members wanted a legal justification of Bibb’s move, though Councilman Kevin Bishop, who chairs the committee that oversees much of the operations of Public Works, told cleveland.com/The Plain Dealer that council wasn’t contesting Bibb’s plan to shift back to the old structure.

“We did our part, so that’s all we can do,” Bishop said. “If [Bibb] doesn’t want to staff that division, he doesn’t have to.”