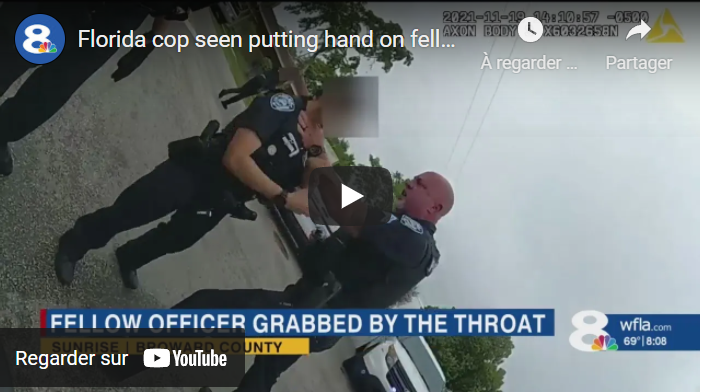 SUNRISE, Florida — A police sergeant is under investigation after video from a body camera shows him grab a female officer by the throat and push her backward toward a patrol car during the arrest of a suspect last year.

Sgt. Christopher Pullease has been placed on administrative leave during an investigation into his conduct, the Sun-Sentinel reports. The incident has created a conflict within the department, with the police union defending the sergeant while the police chief criticized Pullease and praised the female officer for her efforts to de-escalate a confrontation during the arrest, according to the Sun-Sentinel.

The arrest occurred on Nov. 19 but only recently gained attention, WSVN Channel 7 reports. According to WSVN, Pullease leaned into the back of a patrol car and aimed pepper spray at the suspect, who already was in cuffs, but did not use it.

The female officer can be seen in the video running up to Pullease from behind and grabbing his belt, pulling him away from the patrol car. Pullease turns and grabs the female officer by the throat, then begins pushing her backward.

Local 10 reports Pullease has been a member of the Sunrise Police Department for 21 years, while the female officer has been with the department for about two years.

Gordon Weekes, a public defender in Broward County, questions why Pullease has not been disciplined for his actions.

“If you or I or anyone would engage in that type of conduct, the officers that observe that conduct would have arrested us right there on-site immediately, and this officer gets to sit at a desk while they investigate,” Weekes tells Local 10.

“He attacked her,” former New York City detective Joseph Guida tells the Sun-Sentinel. “As far as I’m concerned, he’s got to be fired. He just assaulted a police officer.”