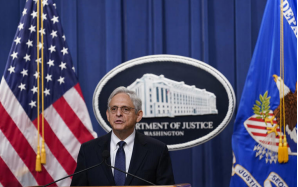 “Monday’s court filing was made
in response to requests from
multiple media outlets, including
The Washington Post, seeking
the affidavit’s public release. Law
enforcement officials submit such
documents to a judge as part of
their application for a search
warrant. Affidavits typically
contain information addressing
why authorities think there is
evidence at a certain property
and other details about an
investigation, including sometimes
the identities of witnesses.
The Justice Department argued
that releasing the affidavit could
hamper its investigation and
potentially harm those involved.

Even when the public is already
aware of the general nature of
the investigation, revealing the
specific contents of a search
warrant affidavit could alter the
investigation’s trajectory, reveal
ongoing and future investigative
efforts, and undermine agents’
ability to collect evidence or
obtain truthful testimony,” the
13-page filing states. “In addition
to the implications for the
investigation, the release of this
type of investigative material could
have ‘devastating consequences’
for the reputations and rights of
individuals whose actions and
statements are described.”

Agents at Trump’s Mar-a-Lago
seized 11 sets of classified
documents, court filing shows
Trump and other Republicans
have said that last week’s search
was politically motivated. The
former president has lashed out
at law enforcement in response
and suggested that the FBI planted
evidence, although he has not
offered information to support his
claim.

Late Monday, Trump called for
the release of the affidavit “in the
interest of TRANSPARENCY.”
“I call for the immediate release
of the completely Unredacted
Affidavit pertaining to this horrible
and shocking BREAK-IN,” he wrote
on Truth Social, his social media
platform.

Earlier Monday, Trump claimed
that the agents who searched Mara-Lago “stole my three Passports.”
The FBI said in response that it
follows search and seizure orders
from the courts, and “returns items
that do not need to be retained for
law enforcement purposes.”
On Friday, a judge agreed to
unseal the court-approved
search warrant and an inventory
detailing the 11 sets of classified
documents retrieved last week
from Mar-a-Lago, Trump’s private
club and residence in Palm Beach.
The documents also identify what
federal laws officials suspect may
have been violated.

The former president said before the judge’s decision to unseal the warrant and inventory list that he favored releasing those documents. Media outlets seeking its release have argued in court filings that documents related to the FBI’s search should be made public because of the “historic importance of these events.” he Post noted in its filing that the
Justice Department requested last week that parts of the search warrant
filings be released because of the
public’s “clear and powerful interest in understanding what occurred in these circumstances weighs heavily in favor of unsealing.” That reasoning, the filing states, should justify unsealing the
affidavit. “Before the events of this week, not since the Nixon Administration had the federal government wielded its power to seize records from a former President in such a public fashion,” The

Post argued in court documents. The newspaper is joined in its motion by CNN, NBC News and Scripps.

The Justice Department’s request arrives as federal law enforcement experiences a rise in threats from supporters of the former president.
In their request to the judge, officials cited a news article about an armed man who last week allegedly tried to breach the FBI’s Cincinnati field office before engaging in an hourslong standoff with law enforcement.
The man, Ricky Shiffer, was killed by authorities later that day.
On Mnday, the Justice Department filed a complaint against a Pennsylvania man, Adam Bies, whom officials
accused of making online threats against FBI agents in the days after the Mar-a-Lago search. The charges were reported earlier by the Pittsburgh PostGazette.

“This is not merely a hypothetical concern, given the widely reported threats made against law enforcement personnel in the wake of the August 8 search,” reads a footnote in the Justice Department’s filing seeking to keep the
affidavit sealed.
The FBI and the Department of Homeland Security on Friday issued a joint intelligence bulletin to employees warning of “violent threats” against federal law enforcement, courts, government personnel and facilities in the wake of the Mar-a-Lago search, according to a copy of the document obtained by The Post.
The chatter observed on social media is said to include a threat to place a bomb outside FBI headquarters in Washington and general calls for “civil war” and “armed rebellion,” the bulletin states. The risk of further violence has prompted the bureau to erect barricades around its offices in downtown D.C.

Monday’s filing also cited officials’ concern about the potential dangers witnesses could face if their names were made public, saying that such
an outcome could deter others from cooperating with the investigation.
The Post reported last week that among the materials FBI agents were seeking to retrieve from Mar-a-Lago were classified documents about
nuclear weapons. People familiar with the investigation did not offer additional details, such as whether the documents being sought involved
weapons belonging to the United States or another nation.