Man dies after being shot while walking down Akron street, police say

A 29-year-old man is dead and a 19-year-old was wounded after they were shot while walking down a street Wednesday evening in the East Akron neighborhood.

Police say the two men were walking along the 400 block of Chittenden Street at about 6:30 p.m. when at least two suspects fired multiple shots at the victims. It’s unclear what motivated the shooting, police say.

Both victims were taken to Summa Health Akron City Hospital, where the 29-year-old was pronounced dead. The 19-year-old male suffered a graze wound, police say.

The two suspects left the area in an unknown direction after the shooting, police say. No arrests have been made and no description was released.

No other injuries were reported, but police say several homes in the neighborhood were struck by gunfire. Dozens of shell casings and other evidence were recovered at the scene.

The victims’ names are being withheld pending positive identification and family notification.

Anyone with information can call detectives at 330-375-2490 or Summit County Crimestoppers at 330-434-COPS. Individuals also can send tips by texting TIPSCO to 274637. People sending tips can remain anonymous. 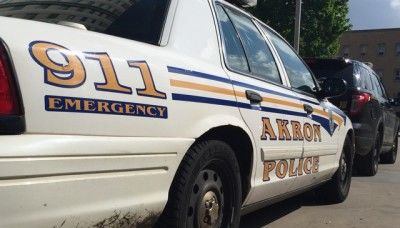