Superintendent Lynn Campbell asks Orange Board of Education members Monday (Feb. 28) for their input on his recommendation to make mask wearing optional for students under age 5, as well as on school buses 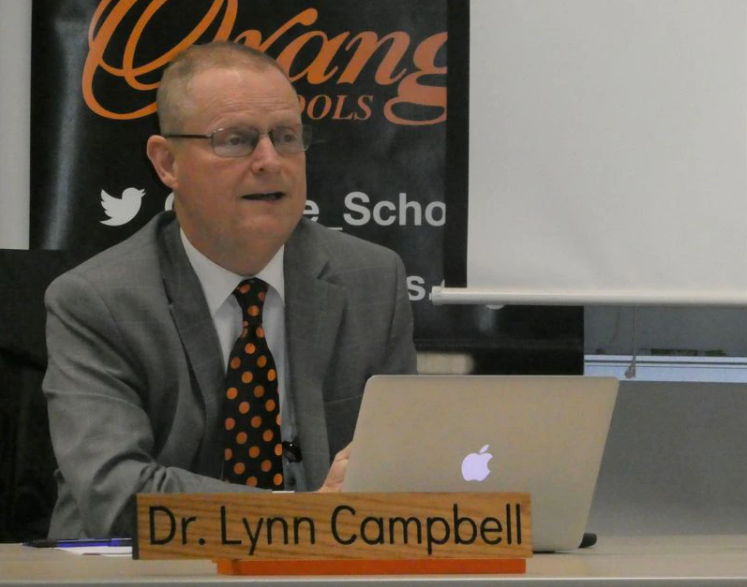 PEPPER PIKE, Ohio — Face masks are no longer required in any buildings in the Orange City School District or on school buses, effective Tuesday (March 1).

On Monday (Feb. 28), the Orange Board of Education accepted Superintendent Lynn Campbell’s recommendation to make mask wearing optional for students younger than 5, as well as for all students and drivers on school buses.

This decision is based on changing guidance from public health officials, as well as COVID-19 case and transmission data over the last two weeks, Campbell said in an email to district families and staff Monday night.

At the start of the school day Monday, the Orange Schools dropped its face mask requirement for students and staff in kindergarten through grade 12.

This change in protocol — announced in a Feb. 16 email to district families and staff — made mask wearing optional for everyone 5 and older on the district’s campus, including the Orange Community Education and Recreation premises.

Face masks are still strongly recommended for all age groups.

Preschool students were not included in the original decision to lift the mask mandate because children younger than 5 have not had the opportunity to receive COVID-19 vaccinations, Campbell said.

“There’s been a lot of change, not just in the last two weeks but in the last few days, with changing guidance from the CDC (Centers for Disease Control and Prevention),” Campbell told the school board Monday.

“(The CDC is) not going to enforce wearing masks on school conveyances. That changed Friday afternoon.”

On Friday (Feb. 25), the CDC announced that it was “exercising its enforcement discretion to not require that people wear masks on buses or vans operated by public or private school systems, including early care and educational/childcare programs.”

The CDC had issued an order on Jan. 29, 2021, that required wearing masks on all public transportation.

In addition, according to the CDC’s new guidance, masking is not a recommended prevention measure in counties where the COVID-19 community level is at low or medium. Cuyahoga County is now in the medium range, Campbell noted.

Campbell said there also has been a significant decrease in the number of COVID-19 cases in the Orange Schools during the past month.

“But more notably, when you look at community transmission, I was happy to see there were only 41 new cases in all of our three major ZIP codes, out of 87,000 people living in those ZIP codes,” he said. “That’s the lowest since Aug. 6.

The district began the school year in August with a face mask requirement for all students, staff and visitors indoors. That mandate had been in place until Monday.

In his email to families and staff Monday, Campbell said if data shows that COVID-19 cases are returning to a high level, or if a cluster of cases are identified in any district schools, face masks could be mandated again.

Anyone who tests positive for COVID-19 will have to isolate for five days, Campbell said in the email. If on day six they are fever free and have no symptoms, they may return to school masked through day 10.

Campbell asked the board Monday to weigh in on his recommendation to make mask wearing optional for students younger than 5, as well as to no longer require masks for anyone riding a school bus, including the drivers.

“I’m supportive of that recommendation,” board Vice President Jeffrey Leikin said. “Vaccination is still the number one deterrent for the virus and for severe reactions to the virus.

“If we recommend (masks) for kids that are not vaccinated, I think that should be true at the high school and the middle school. We’re not requiring them to wear it — it’s their choice; it’s still optional — but letting them know if they’re not vaccinated, we’re recommending they still wear masks.”

Campbell replied, “I understand that, but the recommendation has always been there, from the Cuyahoga County Board of Health, as well as the CDC.

“I think we’re solid on that understanding,” he said. “Our parents are up to date on what the recommendations are by the health officials.”

Board member Angela Arnold asked, “Does anybody know what our staff at OIC feels about this?”

Campbell said he had not spoken to staff members at OIC. He added that Jill Korsok, director of OCER, told him recently that the OCER Preschool staff was supportive of a shift to optional mask wearing.

“What I’ve seen all along is folks just being supportive, especially knowing there’s an option, not a mandate,” he said.

Campbell said he had spoken to other school building administrators on Monday, and he was told “there were a lot of masks still on campus and a lot of staff still masking, and rightfully so.”

“It is important to note that there still isn’t a ban on masking,” he said. “There are still going to be plenty of (people wearing) masks.”

Orange High School Principal Paul Lucas estimated on Monday morning that it was “about 50-50″ regarding the number of students wearing masks at the high school. In the afternoon, it was “probably two-thirds” not wearing masks, he added.

“I spoke to a number of pediatricians and medical professionals, and they all basically said … this is the time to take advantage of this when there’s little or no community spread,” board President Scott Bilsky said.

“We have the numbers. We have the justification, and, hopefully, fingers crossed, we stay in the zone where we don’t have to think about putting a mask mandate back in.”

Campbell said if the district’s COVID-19 cases remain at the level where they are, he would not foresee masks being required for the rest of this school year, “pending any major changes in guidance.”

Also on Monday, Campbell provided an update on the district’s search for a new high school principal.

He said four candidates would be returning Tuesday for a second round of interviews.

“They will be meeting with the administrative team and the academic committee,” he said.

Lucas, who has been principal of Orange High School since 2010, was named the district’s director of human resources in January, effective Aug. 1. Lucas has spent his entire 20-year career in the district.

After finalists are selected, Campbell said input will be sought from community stakeholders in an online group interview. The group would likely include parent support groups, union leadership, some teachers at the high school, some staff and “a handful of students,” he said.

“I’m really looking forward to who comes out as our next leader at the high school,” he said.