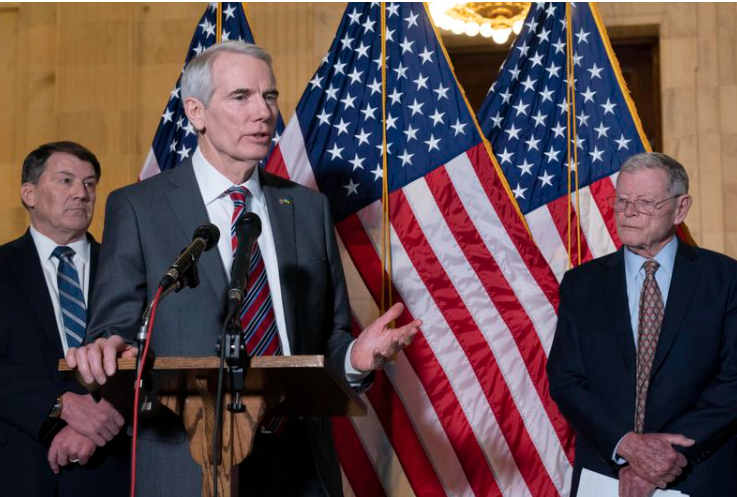 “Tonight, President Putin declared an illegal, unwarranted attack on the people of Ukraine,” Portman, a Republican from Ohio, said in the statement. “I condemn this latest Russian invasion of Ukraine in the strongest possible terms. This violation of the territorial integrity of a sovereign nation is unprovoked, is a flagrant violation of international law, and will result in senseless loss of life.”

Portman’s statement came after President Joe Biden also condemned Russia for an “unprovoked and unjustified attack.” The senator said the attack is a crisis “for all freedom-loving countries around the globe” and warned it could start a humanitarian crisis and “destabilize Eastern Europe in ways not seen since World War II.”

“It is absolutely vital that the United States immediately take decisive action to support Ukraine and our NATO allies in Eastern Europe,” Portman said. “First, President Putin must be held accountable for his actions. Among other measures, the United States and other allies must enact devastating sanctions on Russian leadership, oligarchs, and the economy, including secondary sanctions on financial institutions and sectoral sanctions.

“The Biden administration promised tough sanctions. The administration must stand by that commitment. We can and we must cripple Russia’s military by starving it of financing.”

Biden says he plans to speak to the American people Thursday after a meeting of the Group of Seven leaders. More sanctions against Russia are expected to be announced Thursday.

Portman also called for increased military support of Ukraine and other allied nations in the region. Biden has said he will not commit U.S. troops to Ukraine.

A full-blown Russian invasion could cause massive casualties and topple Ukraine’s democratically elected government. And the consequences of the conflict and resulting sanctions levied on Russia could reverberate throughout the world, affecting energy supplies in Europe, jolting global financial markets and threatening the post-Cold War balance on the continent.

As he unleashed the military action, Putin issued a stark warning to other countries not to meddle.

“I have a few words for those who could feel tempted to interfere with ongoing developments: whoever tries to impede us, let alone create threats for our country and its people must know that the Russian response will be immediate and lead to the consequences you have never seen in history,” he said.

The Associated Press contributed to this story.