A skydiver performing as part of pregame festivities at a high school football game has died after he was critically injured in a “hard landing” during the jump, reports say.

The 55-year-old man, whose identity has not been released, made the jump before a game between David Crockett High School and Daniel Boone High School in Jonesborough, USA Today reports. He was an experienced skydiver, having made more than 1,500 jumps and worked for Jump TN, a company in Greeneville, Tenn.

Witnesses said they didn’t notice anything unusual about the jump and that the man’s parachute seemed to open with no problems. However, authorities with Jump TN say the man made a “hard landing” outside the planned landing area.

The man was flown by helicopter to Johnson City Medical Center, where he died of his injuries.

Washington County Schools Superintendent Jerry Boyd saying a moment of silence was held before the game, but it was will played following a delay, USA Today reports.

“On behalf of David Crockett High School, Daniel Boone High School, and the rest of the Washington County Schools community, we are saddened by the tragic incident that occurred prior to the start of Friday night’s football game at the David Crockett High School football stadium,” Boyd said in a statement, according to WBIR Channel 10. “Our deepest sympathies go out to the family of the injured skydiver that has passed away. We ask that everyone keep the family in their thoughts and prayers as they deal with the loss of a beloved husband, father, and grandfather.” 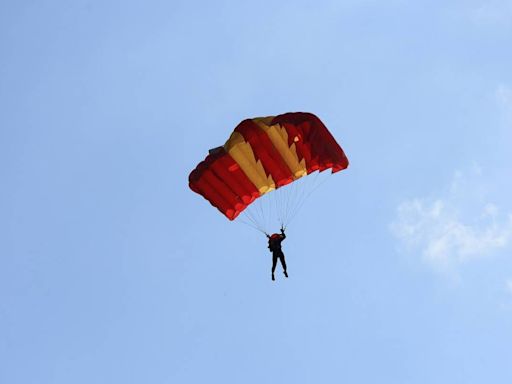