An officer fired at least two shots early Sunday morning after a suspect armed with a handgun rammed a patrol car before driving off, according to police.

It’s unknown if the suspect, who managed to elude police after driving away, was wounded by the gunfire, Police Chief Joseph Mays says in a news release. There were no reports of injuries to officers.

Police say officers were called to the intersection Monticello Boulevard and South Green Road at about 3 a.m. A motorist noticed a car stopped at the intersection and told police the male driver appeared to be passed out.

When officers arrived, they noticed the suspect had a handgun in his lap, Mays says. Moments later, the suspect woke up and drove his car forward, hitting a patrol car.

Officers told the man to stop and put his hands on the steering wheel, but the suspect instead put his car in reverse. An officer then fired two shots before the suspect drove off, Mays says.

Police lost track of the vehicle during a pursuit, but it later was found abandoned by police in Cleveland Heights, Mays says. Police searched the area but were unable to locate the driver.

The shooting is under investigation by the Ohio Bureau of Criminal Investigation, Mays says. 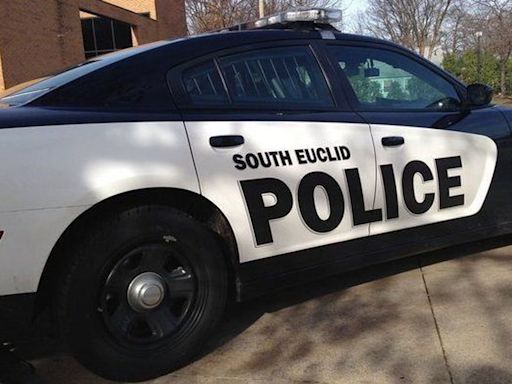