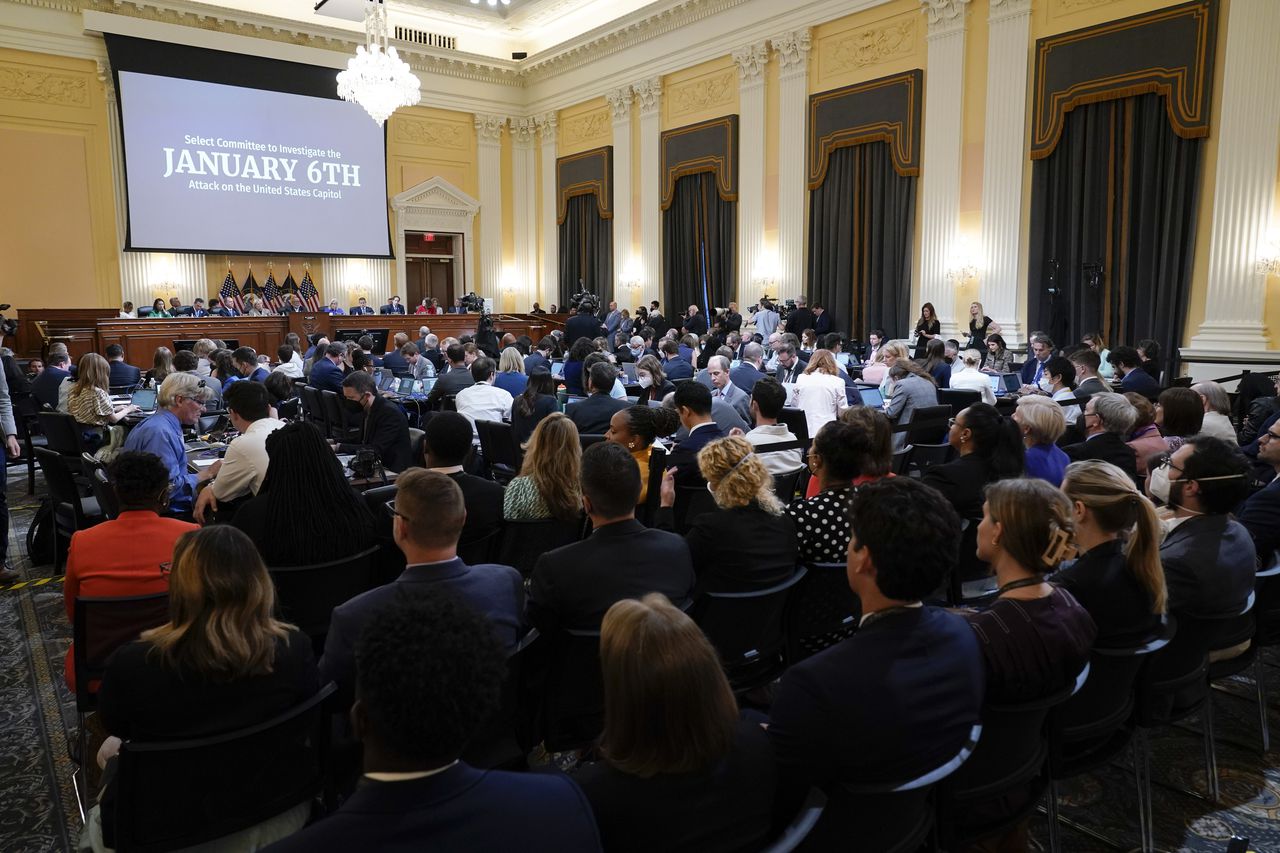 Members of the Select Committee to Investigate the January 6th Attack on the U.S. Capitol on Thursday called the riot an “attempted coup” by former President Donald Trump and said he devised a “sophisticated seven-part plan” to overturn the 2020 election and stop the peaceful transfer of power by spreading lies about election fraud.

“Jan. 6th and the lies that led to insurrection have put two-and-a-half centuries of constitutional democracy at risk,” said committee chair Bennie Thompson, a Mississippi Democrat, who likened the insurrectionists’ defenders to apologists for slavery, lynching and the Ku Klux Klan. “The world is watching what we do here.”

Committee members outlined the sequence of the hearings they’ll conduct this month; showed videos of committee interviews with former Trump White House officials, such as former U.S. Attorney General William Barr; and played a lengthy video of Trump supporters attacking police and swarming the Capitol. The video was cut with statements from Trump at the rally that led to the riot. It juxtaposed footage of rampaging rioters with statements Trump made about how “peaceful” and “unbelievable” the crowd was.

“The love in the air, I’ve never seen anything like it,” said Trump.

Members of the committee indicated that some GOP Congress members were key to Trump’s efforts to overturn the election, but named just one at the hearing: Pennsylvania’s Scott Perry. The committee has subpoenaed testimony from Perry and several of his colleagues, including Ohio’s Jim Jordan. Jordan, of Champaign County, calls the probe a “witch hunt” intended to distract the country from problems Democrats have failed to solve, like inflation and rising gasoline prices.

Jordan sent Thompson a letter Thursday arguing their subpoena lacks a “legitimate legislative purpose,” and asserted it was issued “for purposes of harassment, embarrassment, the self-aggrandizement of the Select Committee members, and to weaken my position in the future.”

“You seem to believe that you have the authority to arbitrate the scope of a colleague’s official activities,” Jordan’s letter says. “Respectfully, I do not answer to you or the other members of the Select Committee. I am accountable to the voters of Ohio’s Fourth Congressional District who I have the privilege to represent in the House of Representatives.”

The Select Committee’s hearing aimed to prove the Jan. 6 violence stemmed from Trump’s words and deeds. Video they played at the hearing indicated Proud Boys members who breached the Capitol regarded a presidential debate statement by Trump that they should “stand back and stand by” as a call to arms. After Trump invited supporters to a “big protest in D.C. on January 6th” that he promised “will be wild,” they established a command structure in anticipation of occupying federal buildings. Another group called the Oathkeepers deposited arms in Virginia and set up quick-reaction forces so they could be on standby to support Trump.

Videos shown by the committee indicated Trump inflamed the rioters by making repeated rally statements that Vice President Mike Pence should reject the electoral college votes Congress was counting that day. They showed video of Proud Boys members reading aloud a Trump tweet issued during the riot that claimed Pence “didn’t have the courage to do what should have been done.” Crowd members chanted “Hang Mike Pence” after reading Trump’s message.

“When the committee reconvenes next week, we’re going to examine the lies that convinced those men and others to storm the Capitol to prevent the transfer of power,” Thompson said at the hearing’s conclusion. “We’re going to take a close look at the first part of Trump’s attack on the rule of law, when he hit the fuse that ultimately resulted in the violence of Jan. 6.”

The committee’s Republican vice chair, Wyoming’s Liz Cheney, said the next hearing will show how Trump and his advisers knew he lost the election yet “engaged in a massive effort to spread false and fraudulent information – to convince huge portions of the U.S. population that fraud had stolen the election from him.” Cheney showed video of Trump’s former attorney general, William Barr, telling the committee he repeatedly told Trump he saw no evidence of fraud that would have affected the election’s outcome.

“Frankly, a year-and-a-half later, I haven’t seen anything to change my mind on that,” Barr said.

Cheney said its third hearing will show how Trump “corruptly” planned to replace Barr so the Justice Department would spread his false stolen election claims. She said that in the days before Jan. 6, Trump told his top Justice Department officials, “Just say the election was corrupt and leave the rest to me and the Republican Congressmen.” She said several congressmen involved in Trump’s effort to overturn the election, including Perry, sought presidential pardons from Trump.

A Jordan spokesman said his boss did not seek a pardon because he did nothing wrong.

Cheney said the committee’s fourth hearing will focus on Trump’s efforts to pressure Pence and Pence’s insistence he had no right to overturn the election. Its fifth hearing will focus on Trump’s efforts to pressure state legislators and election officials into changing results, said Cheney, and its last two June hearings will show “how President Trump summoned a violent mob and directed them, illegally, to march on the U.S. Capitol. While the violence was underway, President Trump failed to take immediate action to stop the violence and instruct his supporters to leave the Capitol.”

“Although certain former Trump officials have argued that they did not anticipate violence on Jan. 6th, the evidence suggests otherwise,” Cheney said. “The White House was receiving specific reports in the days leading up to Jan. 6th, including during President Trump’s Ellipse rally, indicating that elements in the crowd were preparing for violence at the Capitol.”