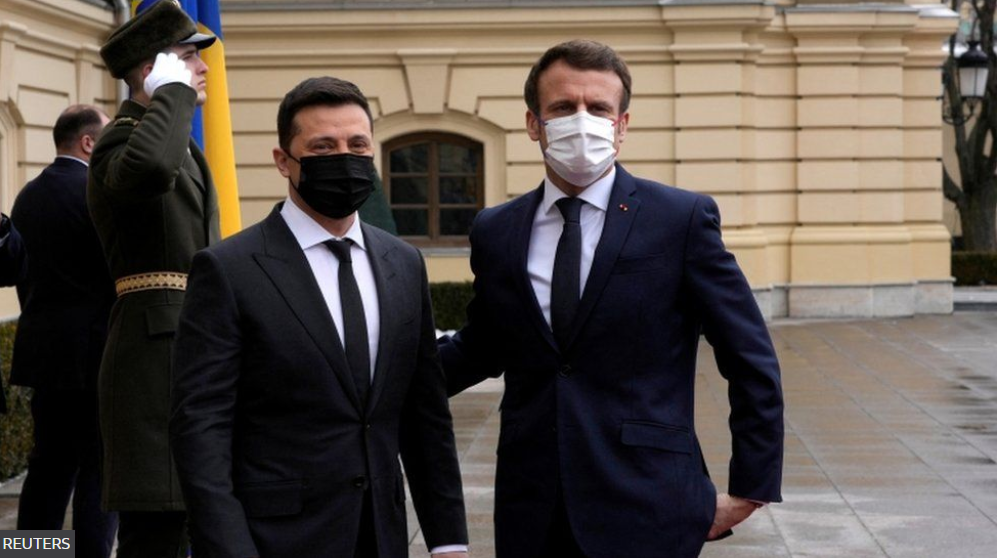 French President Emmanuel Macron has told reporters that President Vladimir Putin assured him that Russian forces would not ramp up the crisis near Ukraine’s borders.

“I secured an assurance there would be no deterioration or escalation,” he said before meeting Ukraine’s leader.

However, Russia said any suggestion of a guarantee was “not right”.

Russia has denied any plans to invade Ukraine, but it has assembled more than 100,000 troops near its borders.

US officials believe Russia has assembled 70% of military forces needed for a full-scale invasion.

Moscow accuses the Ukrainian government of failing to implement the Minsk agreement – an international deal sponsored by Germany and France to restore peace to the east, where Russian-backed rebels control swathes of territory and at least 14,000 people have been killed since 2014.

President Macron this week is on a diplomatic tour of national capitals. He arrived in the Ukrainian capital, Kyiv, on Tuesday after almost six hours of talks with Mr Putin in Moscow on Monday.

At a news conference with Ukraine’s President Volodymyr Zelensky, Mr Macron said there was now the chance to “make these negotiations move forward” between Russia and Ukraine, and that he could see “concrete solutions” to reducing tensions.

Mr Zelensky meanwhile called on Mr Putin to take serious measures to reduce tensions. “I do not really trust words, I believe that every politician can be transparent by taking concrete steps,” he said.

Mr Macron then flew to Berlin, where he joined the leaders of Germany and Poland in expressing their joint support for Ukrainian sovereignty.

The leaders met as part of a summit of the Weimar Triangle group, formed 31 years ago after the end of the Cold War, to help deal with challenges now facing Europe. 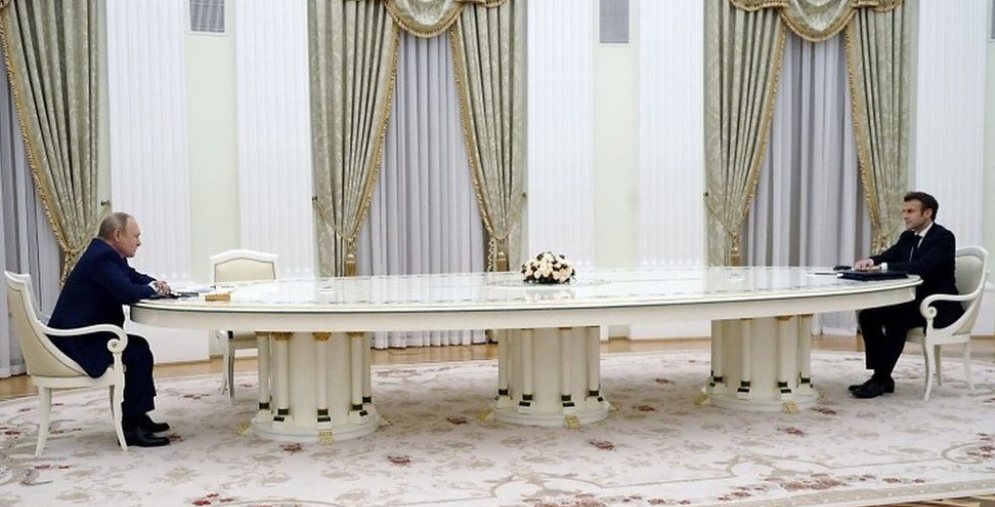 Mr Putin hinted on Monday that some of Mr Macron’s proposals “could form the basis of further joint steps” – although they were “probably still too early to talk about”.

A French official later told reporters that the two leaders had agreed that Russia would pull troops out of Belarus at the end of exercises taking place near Ukraine’s northern borders.

Kremlin spokesman Dmitry Peskov however denied any deal had occurred – although the troops were expected to return to Russia at some point, he said.

US President Joe Biden met the German leader in Washington on Monday and threatened to shut down a key Russian gas pipeline to Germany, called Nord Stream 2, if Moscow invaded Ukraine.

Chancellor Scholz – on his first trip to Washington since becoming chancellor and facing criticism for his response to the Ukraine crisis – was however more ambiguous about the pipeline than Mr Biden.

Western countries have already rejected a number of Moscow’s demands, including that the Nato defence alliance rule out Ukraine becoming a member, and that it reduce its military presence in eastern Europe.

Has Macron averted a war?

The view from Kyiv

The Ukrainian president absolutely doesn’t trust Mr Putin. “Openness in a leader is fine”, he responded when Mr Macron talked about his frank discussions with the Russian leader. “But only if it’s not a game.”

Mr Zelensky welcomed Emmanuel Macron’s support and said the two men had a “common vision” regarding the challenges facing Ukraine, Europe and the world. But there were awkward moments. Mr Macron had to deny he’d cited Finland as a possible model for Ukraine’s relationship with Nato (close, but not a member). Mr Zelensky appeared to make light of it but didn’t sound impressed.

Mr Putin says he wants to invigorate the 2014 Minsk Agreement, and this is also a challenge for Mr Zelensky. Signed by his predecessor, in the middle of the war, he fears – as do most Ukrainians – that implementing Minsk in its current form will serve to enhance the authority of the pro-Russia separatists who currently control parts of the Donbas.

Mr Zelensky is basking in a growing measure of international support. Foreign dignitaries are coming in and out of town in a way that Kyiv has rarely seen. This crisis has yet to ease, but seems marginally less acute.

The view from Moscow

In the words of the Kremlin, President Macron may have arrived in Moscow with some “seeds of reason”, but they haven’t yet flowered into an agreement. Russia is keeping its powder dry, calling the talks long but informative.

Any suggestion that France had secured a deal were also quickly slapped down; Kremlin spokesperson, Dmitry Peskov, said that it would be impossible for Moscow and Paris to do a deal as France is not the leader of Nato.

Russia’s main focus, it seems, is still on the US. Crucially, Russia has yet again emphasised that it feels its security concerns around potential Nato expansion have not been answered. Continuing to put this front and centre in the diplomatic discussions makes negotiations difficult as neither side have shown any sign of giving ground.

While both sides talk and then plan for more talks, troops continue to build on Ukraine’s border and on Nato’s eastern flank. The wait continues. 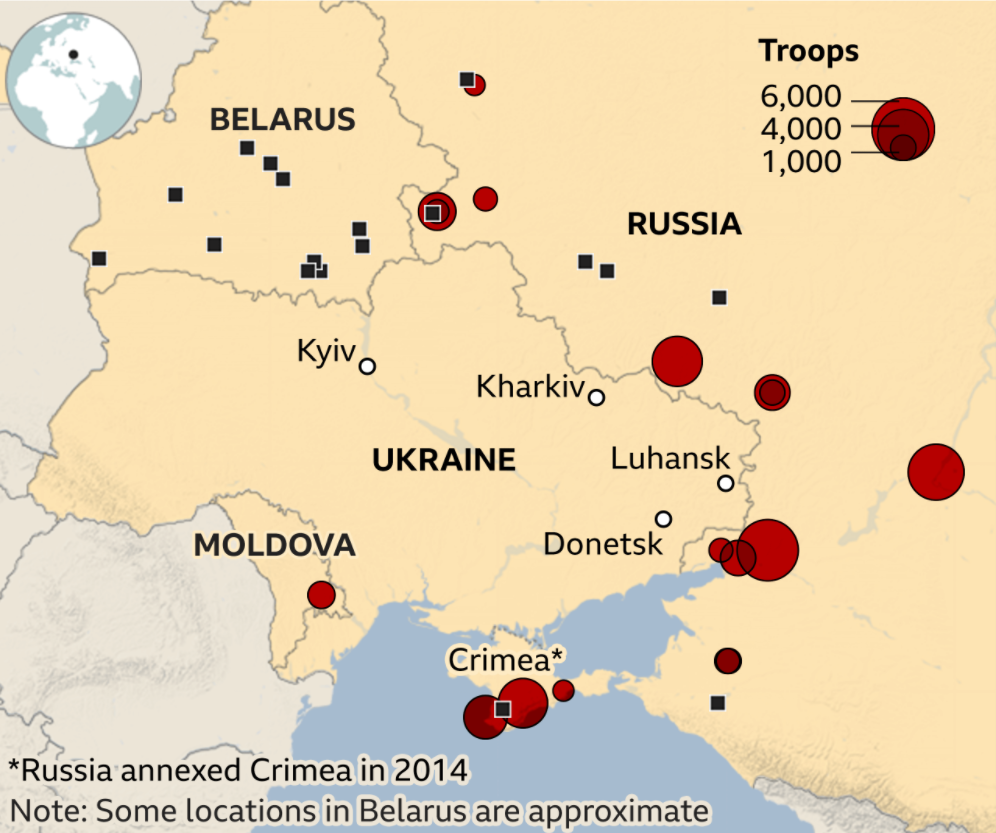