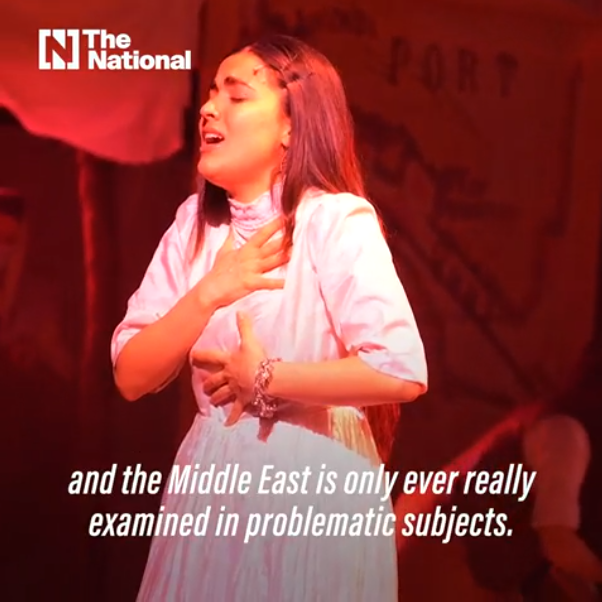 A musical adaptation of a poetic novel by the renowned Lebanese-American writer and poet, Gibran Kahlil Gibran, starts its run on Tuesday in London’s West End.

Based on the literary icon’s autobiographical masterpiece of the same name, Broken Wings tells the true story of Gibran’s first love through a mix of poetry and music.

Set in turn-of-the-century Beirut, an 18-year-old Khalil Gibran falls in love with Selma Karamy, the daughter of his father’s friend, but their joyous affair is soon thrown off course by societal obligations and conventions. Portraying the happiness and infinite sorrow of his relationship with Selma, Gibran at the same time probes the spiritual meaning of human existence with profound compassion.

Written by British-Lebanese actor Nadim Naaman and with a musical score composed by Qatari musician Dana Al Fardan, the theatrical voyage explores issues of gender equality, immigration and the ability to love freely.

A long-running performer in the West End, Naaman told The National that he was motivated to bring the story of one of the region’s literary heroes to a western audience by his frustration at the lack of authentic Middle Eastern representation on stage.

“It’s a very fictitious world in the western media and the Middle East is only ever really examined in problematic subjects like terrorism, immigration and politics and I wanted to showcase some of my heritage and my culture in a positive light,” he says.

The play’s co-writer Al Fardan echoed similar sentiments, telling The National that there was a “huge demand” from global audiences to see “different textures, different flavours, different sorts of thinking”, on stage.

“When it comes to Arabs, the media is so stringent in portraying negative perspectives, it’s very interesting to see the alternative,” she says.

“[The Middle East] is already in people’s consciousness as this highly volatile and exotic region that no one really understands.”

Broken Wings premiered in 2018 in the West End at the Theatre Royal Haymarket before it toured the Middle East. After hearing the “arresting score”, producer Katie Lipson said she was committed to bring the story to stage in London in full production, returning the play for a run at Charing Cross Theatre.

“I find it a unique musical set in the melting pot of the Middle East but with a familiar story of longing, loss and discovery with an incredible writing team,” she said.

Naaman and Al Fardan have co-written a second stage musical, Rumi: The Musical based on a story about the 13th century philosopher and poet, which is still in production.

Singer, actor and first-time playwright Naaman grew up in England with Gibran’s words hanging on the walls of his house and regularly heard them read at weddings and funerals. While the thespian knew him as a “man for the big occasion”, Naaman discovered that his work spoke to millions of people living in the diaspora whose voice was always “slightly repressed”.

Born in 1883 in the town of Bsharri in modern-day Lebanon, Kahlil Gibran emigrated as a young boy with his family to the United States, where he studied art and embarked on a literary career that would gain him worldwide acclaim.

The third best-selling poet of all time, Gibran’s romantic style of prose poetry was a marked break from the classical school of writing and heralded a renaissance in modern Arabic literature.

His most internationally recognised work is The Prophet, written in 1923 and includes a series of philosophical essays written in poetic English prose.

Regarded as something of a political and social rebel for his unconventional philosophies, Gibran regularly raised and debated difficult social issues in his writings, as is the case with Broken Wings, in which the author examines religious corruption and patriarchal restrictions on women in the Eastern Mediterranean.

Promised to another man chosen by her father and a priest, Selma is unable to pursue her heart’s desire with Gibran, ultimately leaving the two heart-broken with Selma trapped in a marriage not of her choosing.

“Gibran was a century ahead of his time, he was a feminist, he was about peace and tolerance and equity between all the faiths,” says Naaman, who calls him the “Shakespeare of the Middle East”.

Much of the appeal in reproducing this love story for stage — a feat Naaman was surprised he was the first to do — were the important debates raised in Gibran’s story, many of which he says remain increasingly relevant more than a century later.

“I think at the heart of Broken Wings is this idea that we all need to ask ourselves the question, at what point does what is familiar become inappropriate or harmful to our descendants?” says Naaman.

“As Middle Easterners, we all come from a region that is deeply rooted in tradition, deeply rooted in customs with a beautiful tradition and a beautiful history. But there are countless stories and countless examples where somebody’s true desire and self is completely repressed and oppressed by societal structures. We have to be better at moving with the times, we have to be able to ask questions of our traditions.”

Naaman says his shared heritage with the musical’s subject and their similar ‘east-west fused life’ meant he found it hard to step away from the stage, where he plays an ageing Gibran who narrates part of the play.

“It’s an unusual feeling, to have lived in two such different lands; two halves of an education, two languages,” says the older Gibran in the musical, reflecting both writers’ — Naaman and Gibran — sentiments.

Given that the musical marks his debut as a writer, Naaman is just as keen to hand over the role to someone else when the time comes.

“I can’t wait to see somebody else do it and to watch it because I’ve never had that experience as a writer, I’ve never been able to sit in the auditorium and watch my work come alive,” he says.

Produced by Katie Lipson and directed by Bronagh Lagan, Broken Wings has two more women at its helm, in keeping with Kahlil Gibran’s modernist feminist philosophy, something that fills Al Fardan with pride.

The composer says she saw Broken Wings as a platform for women who don’t have a voice with Selma’s song, So Many Questions, the first one she composed from the musical’s repertoire.

“My relationship with Selma is empowering that voice and shedding a light into a space which otherwise would have like fallen into obscurity,” she says.

Celebrated as Qatar’s first female contemporary composer, singer and songwriter, Al Fardan’s debut album Paint was released in 2013 to nationwide acclaim and was followed by her orchestral album Sandstorm in 2017. Also the cultural ambassador for the Qatari Philharmonic Orchestra, Al Fardan is accustomed to the big stage, nevertheless she told The National that she was nervously pacing around her studio for days before she started creating the musical score for Broken Wings.

“It was the most challenging thing I’ve ever done. I remember telling my colleague. ‘I can’t do this. Why did I put myself in this situation?’ ” says the self-taught musician while sitting at a piano in the theatre where she gives me a sneak listen to the musical’s opening overture.

“My style is more minor-key and Nadim was saying, ‘we need uplifting, chirpy songs’ and I’ve never written anything like that in my life so that was super exciting because that is an evolution in my capacity [as an artist],” she says.

Equally rewarding, she says, was the ability to humanise “universally accessible figures” from the Middle East for a Western audience.

“That’s everything that I think an artist would want to be, to make an impact and to be an instrument of change.”