(CNN)Beijing has rolled out mass Covid testing for nearly 20 million residents in most of the city, as authorities race to contain a fresh Omicron outbreak that has sparked panic buying amid fears of a Shanghai-style lockdown.

The Chinese capital started testing all residents of Chaoyang, a bustling district home to the business center and foreign embassies, on Monday morning, in the first of three rounds of testing to be conducted over a five-day period. Residents and office workers formed long lines at makeshift testing centers throughout the day.
As of 8 p.m., nearly 3.7 million tests had been carried out, with more than half a million having returned a negative result, city officials said at a late-night news conference.
The officials also announced that mass testing would be expanded Tuesday to all but five outlying districts of the capital, covering about 19.5 million of the city’s 21.5 million residents.
The announcement came after 29 cases were detected in the 24 hours through 4 p.m. Monday, though officials said all the new cases were discovered in areas already under epidemic controls.
“The outbreak in Beijing is coming fast and furious,” Xu Hejian, a spokesperson for the Beijing municipal government, said at the news conference, adding that Beijing’s epidemic prevention and control efforts have “reached a critical moment.” 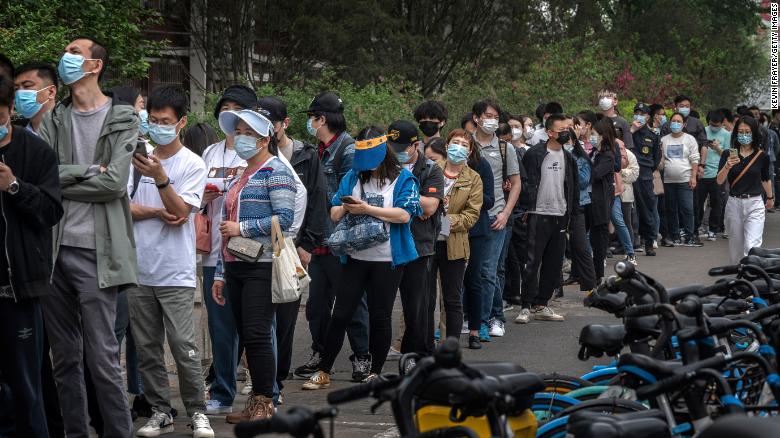 People line up for Covid tests at a makeshift testing site in Beijing’s Chaoyang district on Monday.
Since Friday, Beijing has reported a total of 80 cases. Although the caseload is still relatively low, authorities are not taking any chances, especially after seeing how fast the Omicron outbreak in Shanghai spiraled into tens of thousands of new cases.
Dozens of residential compounds across eight districts are already under strict lockdowns, in which residents are banned from leaving their homes or community grounds.
Officials have urged residents not to leave the city unless absolutely necessary, including during an upcoming five-day holiday. The Labor Day holiday, which begins on Saturday this year, has traditionally been a time for mass travel in China. But it is likely to be much more subdued this year.
Beijing is also suspending cultural performances, sports events, exhibitions and other activities that involve large gatherings, as well as all tutoring classes and training sessions.
The announcement of mass testing in Chaoyang late on Sunday triggered panic buying overnight. Long lines formed at supermarkets, where customers emptied shelves of fresh produce, while online delivery apps sold out of some food items.
Some supermarkets and stores extended their opening hours to cope with the influx of customers. By the next morning, many had restocked.
Beijing officials and state media have repeatedly tried to reassure residents. “Don’t worry! Daily necessities are in full supply and prices are stable,” shouted Monday’s front page of the Beijing Evening News, a state-owned tabloid, which ran the headline alongside a large photo of supermarket shelves full of potatoes, onions and other vegetables.
But many residents remain worried. Widespread food shortages caused by Shanghai’s ongoing weeks-long lockdown sparked online uproar this month.
On Tuesday, Shanghai reported 16,980 infections, including 52 Covid-related deaths, according to the National Health Commission.