Finland is on the verge of asking to join NATO. Here’s why that’s bad news for Putin

Vladimir Putin’s invasion of Ukraine has backfired on a number of fronts. But one of the most disastrous consequences of all for the Russian President is the increasingly likely prospect of Finland joining NATO.

The Nordic nation is expected to announce its interest in NATO membership as soon as this week after its Foreign Affairs Committee drafts a response to the government’s security report — which includes the option of joining the alliance. After that, the Finnish parliament will hold an extraordinary debate on whether to approve the security report recommendations.
At this point it is very likely NATO would invite the country to talk about accession to the alliance.
It is broadly believed this would happen very quickly, as Finland already meets most of the criteria and it’s highly unlikely any NATO members would object.
Multiple recent opinion polls have shown that at least 60% of Finns are now in favor of NATO membership, a huge jump from a previous high of around 30% in past years.
If this plays out as expected, this country of under 6 million people will have redrawn the European security map in a way that was previously inconceivable and may have tremendous consequences for Russia. 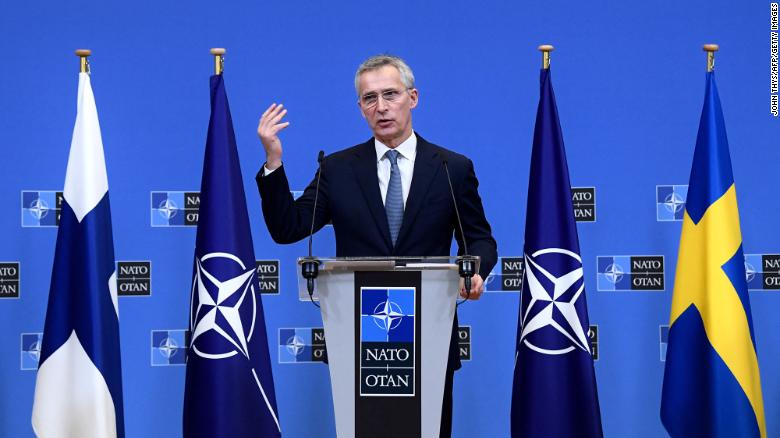 NATO Secretary General Jens Stoltenberg talks speaks during a joint press with Sweden and Finland’s Foreign ministers after their meeting at the Nato headquarters in Brussels on January 24, 2022.
Before Putin invaded Ukraine, he made clear his belief that NATO had edged too close to Russia and should be stripped back to its borders of the 1990s, before some countries that either neighbor Russia or were ex-Soviet states joined the military alliance.
Russia currently shares about 755 miles of land border with five NATO members, according to the alliance. Finland’s accession would mean that a nation with which Russia shares an 800-mile border would become formally militarily aligned with the United States.
Not only would this be bad news for the Kremlin, but the addition of Finland would be quite a boon for NATO. Despite its relatively small population, Finland is a serious military power that has been unofficially aligned with the West for decades. Its military has for decades used equipment purchased from the United States that is compatible with NATO allies, meaning it could easily join NATO missions should it choose to do so.

Many believe the only reason Finland hadn’t joined the alliance prior to the Ukraine crisis was simple pragmatism.
“Finnish security has always been based on two concepts: first geography and history; second idealism and realism,” Alexander Stubb, a former Prime Minister of Finland, told CNN.
“In an ideal world we want to cooperate with Russia, which we cannot escape being our geographical neighbor. But we also know from history that the greatest realistic threat to our national security is Russia. Over time, the reality that Russia is willing to create greater chaos in our region has become even clearer, so joining NATO becomes the pragmatic option,” he said.
Historically, Finland has navigated these competing realities by simultaneously indulging Russia’s security concerns, however irrational they may be, while also maintaining high defense spending and a standing military that is compatible with Western allies.
“It’s always been bonkers, the idea that a Western country would invade Russia, but we have tried to minimize those concerns by boosting trade and cooperating in other areas,” said Charly Salonius-Pasternak, a leading researcher in global security at the Finnish Institute of International Affairs.
He adds, however, that on top of policies like conscription — all Finnish men are liable to be called up for military service — and high defense spending, Finnish politicians have consistently sold to the public the idea that Finland’s idealistic way of life must be maintained at all costs. 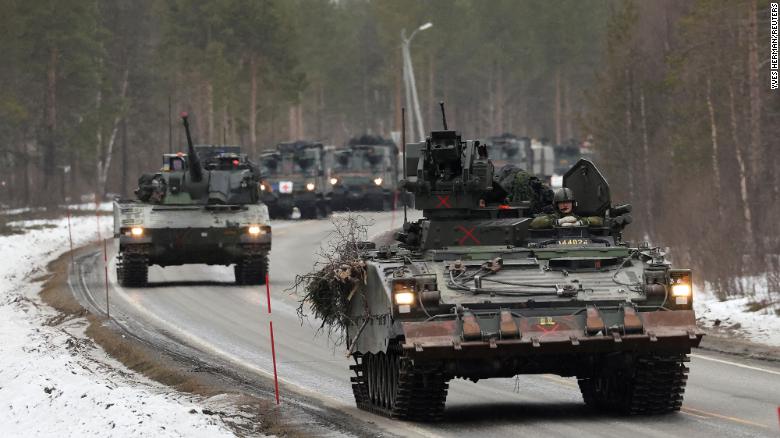 Swedish Army armoured vehicles and tanks participate in a military exercise called “Cold Response 2022”, gathering around 30,000 troops from NATO member countries as well as Finland and Sweden, amid Russia’s invasion of Ukraine, in Setermoen in the Arctic Circle, Norway, March 25, 2022.
“Finland’s default ideology has been one of survival. In the past 100 years we have become a strong, sovereign country with high standards of living. We have had to sacrifice land in order to maintain peace,” Salonius-Pasternak said. “It is therefore vitally important that our way of life survives, whether that is by pragmatic diplomacy or taking a harder stance against our greatest threat.”
There is no doubt that Finland joining NATO would be a major blow to Putin. Not only would it mean those extra 800 miles of shared border with the alliance, but symbolically it would go further in uniting the anti-Putin coalition that has emerged since the invasion of Ukraine. Countries that were once neutral are now providing funding and arms to Ukraine and Putin is an international pariah with fewer allies by the day.
It would also expand NATO’s influence in northern Europe all the way up to the Arctic, an area that is becoming increasingly important geopolitically due to its natural resources, strategic location and numerous territorial claims — including by Russia, Finland and the US.
Sweden, which neighbors Finland to the west, is also considering joining the alliance — and Finland’s accession would make it all the more likely, as the two countries have been on a similar journey since the start of the Ukraine crisis.

Of course, there are concerns over how Russia might react to Finland expressing its desire to join NATO.
Martti Kari, who previously served as Finland’s assistant chief of defense intelligence, told CNN that Russia is already starting a misinformation campaign against it. “The main theme is that Finland is a Nazi country, because we fought against [the] Soviet Union in the Second World War alongside of Nazi Germany,” he said.
He predicts that Russia could violate Finland’s airspace and disrupt its activities at sea, including shipping, as well as upping its intelligence operations against the country.
Håkon Lunde Saxi, an associate professor at the Norwegian Defence University College, thinks that any move toward Finnish NATO membership would “probably result in a Russian military build-up along NATO’s new border with Russia, which would in itself not be beneficial for Finnish or European security.” 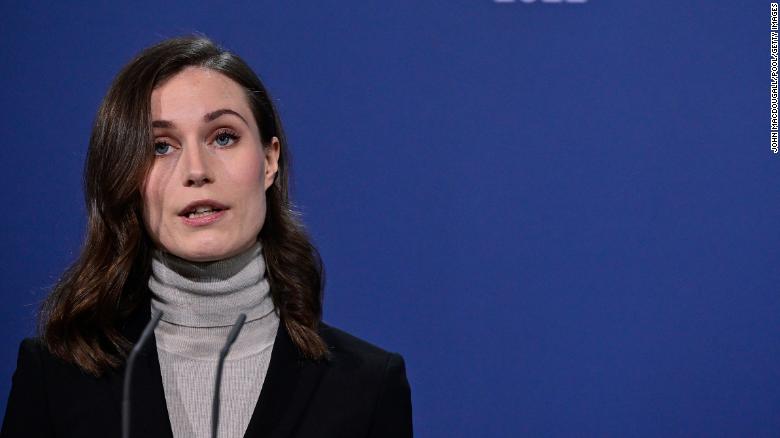 Finland’s Prime Minister Sanna Marin addresses a press conference with German Chancellor Olaf Scholz before talks at the Chancellery on March 16, 2022 in Berlin, Germany.
However, he believes that the benefits would by far outweigh the “possible negative consequences of a somewhat larger Russian military footprint along Finland’s border.”
And despite concerns over what would happen in the interim period, where Finland would not be protected by NATO membership but would be in negotiations, multiple officials have told CNN that they expect members of the alliance, notably the UK and US, to guarantee Finnish security through this process.
Of course, nothing is certain until Finland makes the first move of declaring its intention. But with public approval, political support and Russia providing every reason for another of its neighbors to join its hated rival, there’s little doubt that Putin’s gambit to decrease NATO’S influence in Europe has backfired, spectacularly.

A couple was injured when a bear broke into their home through a window, forcing them to kill the bear by first stabbing it, then shooting it, authorities say. Authorities with the Taylor County Sheriff’s Office tell WQOW Channel 18 the attack occurred Friday night....