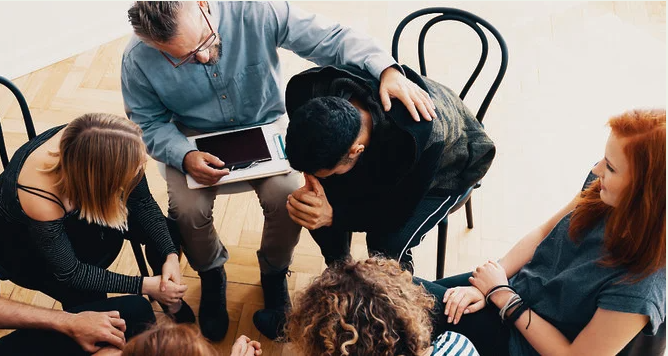 BANGALORE, India: Pia Abou Antoun, a 19-year-old Clubhouse moderator based in Beirut, still remembers  the heartfelt moment she experienced during an early session on the invitation-only audio app.
“A young woman from Egypt shared her story for the first time — she had always struggled with her weight and appearance. After being bullied through her childhood, she developed anxiety and depression,” Antoun said.
“She started crying and it was a very emotional moment for all of us in the room. It really touched my heart, as I could relate to her.”
Antoun is the founder of Dare Female, an online platform that encourages discussion on mental health, and also hosts regular sessions on Clubhouse, the social networking app that allows users to join virtual “rooms” on discussions that interest them.
Users can moderate, actively engage or simply sit in on these conversations. Rooms provide privacy options ranging from open to invitation-only, closed rooms. Much like a Zoom conference, users have to raise their “hand” to be allowed to speak.
Clubhouse was initially launched as a niche app catering to San Francisco’s tech and venture capitalist community but has found immense popularity in the Middle East. In February this year, the app had more than 4 million downloads in Europe, the Middle East and Africa.
According to a Carnegie Melon University analysis, a wide range of political, social and cultural topics have already been discussed in Arabic-language Clubhouse chat rooms, including “politics, identity, religious beliefs and sexual orientation.”
Initially, Antoun sat in on rooms with nearly 100 members and quickly realized that people wanted to discuss mental health.
“We lack mental health awareness,” she said.
Recent research in the Arab Gulf countries reveals that there are high levels of stigma, negative beliefs and inappropriate practices associated with mental illness.
A 2019 Arab Youth Survey found that 50 percent of respondents in 15 Arab countries believe that mental illness carries a stigma.
Dr. Sarah Rasmi, psychologist and founder of Thrive Wellbeing Center in Dubai, said that while mental health has become prominent in public discussions in the past few years, particularly with the millennial and Gen Z demographic, it still carries a level of stigma. In this demographic, some of the issues she sees in her practice are work-life balance, procrastination and burnout.
“One of the most important things we can do to combat stigma is to normalize the conversation around mental health,” Rasmi sid. “By normalizing the conversation, we also encourage people to seek help at an earlier stage.”
As Antoun began hosting Clubhouse discussions, she found the voice-only aspect of the app immensely liberating. “People tend to speak freely, without fear of being judged. This authenticity and vulnerability really unite people.”
The community aspect of Clubhouse can be likened to a virtual support group. If individuals are uncomfortable talking about mental health within their inner circle, a support group can help normalize the experience and make people feel less lonely.
“Particularly in societies where seeking mental health support is still stigmatized, individuals find support groups a safe place to share, process and bond with people who are living through a similar experience,” Rasmi said.
Ally Salama, 24, founder of the mental health and wellness magazine EMPWR has moderated several therapeutic and powerful sessions on Clubhouse.
Given that social media is frequently criticized for filtering reality and diminishing authentic human connection, Clubhouse, in some ways, brings back the connection.
“Audio platforms are not only more intimate, but also allow for enhanced connectivity, space for discourse, and a deeper, more meaningful conversation,” Salama says.
The Dubai-based mental health advocate believes that the Clubhouse audience is much more intentional. “You don’t just stumble into a room or end up swiping or seeing a story on your feed,” he said. “They actually come into your room and commit to the discussion.”
As attention has become a valuable commodity, the topic of mental health has grown more urgent. Citing statistics from the region, Salama said Clubhouse reflects society. He describes young people seeking an outlet on Clubhouse rooms for anxieties and worries compounded by the pandemic crisis, as well as turmoil in Lebanon and Palestine.
Clubhouse can offer more nuanced and meaningful discussions compared with other social media platforms, but 24-year old Mahmoud Khedr doesn’t attribute this solely to the app, adding that purposefully designing and clearly defining the objectives of the room can benefit discussions.
As the co-founder of
FloraMind, a platform that works with schools and government organizations to address mental health issues among youth, Khedr hosts frequent rooms on Clubhouse.
However, his sessions are much more targeted and specific to particular communities, such as Arab youth in the US or mental health support groups for men. He brings in both mental health experts and people with particular experiences to offer fresh and interesting perspectives.
While the term “safe space” has become a catchall for any new platform, mental health advocates are mindful of how they define this phrase within Clubhouse. Khedr includes a trigger warning since content can include difficult conversations, such as suicide attempts.
“Confidentiality is a priority and we hope people respect that by not recording or sharing content discussed in the session,” he said.
Other ground rules include being empathetic, giving space for people to share, and refraining from offering unsolicited advice on mental health.
Salama also works with psychologists to ensure that the vocabulary and language are inclusive and safe for everyone.
“The important thing to remember is that anything we see on social media does not substitute for therapy,” Rasmi added.
She suggested that social media users be mindful of disclaimers and consume content from a credible source. As the next best step and if needed, she recommends individuals contact qualified professionals.