Hariri says will not form govt to satisfy Aoun’s demands 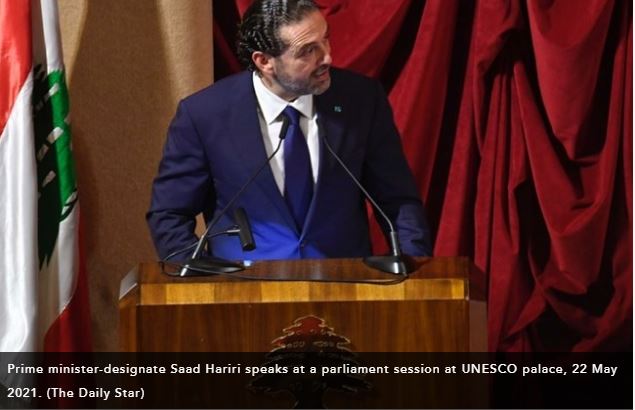 BEIRUT: Prime minister-designate Saad Hariri accused President Michel Aoun of deliberate obstruction to the Cabinet formation and said he will not form a government under Aoun’s demands at a Parliament session Saturday.

“I will not form a government as the team of his excellency the president wants it, nor as any other political group wants it. I will only form the government that stops the collapse and prevents the great crash that threatens the Lebanese in their food, health, lives and their state,” Hariri said.

The speech followed the opening of a session at the UNESCO Palace called by Speaker Nabih Berri to discuss the letter sent by Aoun on the government deadlock, after the meeting was prematurely adjourned Friday over concern of strained ties between Hariri and Aoun.

Addressing the MPs present at the meeting, Hariri, in an increasing souring of relations between the two leaders, said Aoun was trying to disrupt the Constitution and block the Cabinet formation process with the aim of forcing the government to hold a no-confidence vote on the prime minister-designate.

“And if the vote failed to gain confidence, it would have achieved what he [the president] wanted, and got rid of the prime minister.”

At the Friday meeting Parliament heard the contents of the letter in which Aoun blamed Hariri for the country’s political crisis and claimed that he was incapable of forming a Cabinet to rescue the country from collapse.

“It has become evident that the prime minister-designate is unable to form government capable of salvation and meaningful contact with foreign financial institutions, international funds and donor countries,” Aoun wrote in his letter.

Lebanon has been without a fully functioning government since August when the previous one resigned in light of the devastating explosion in the port of Beirut.

Formation efforts have so far been blighted by political infighting and old rivalries, causing further instability to a country teetering on the edge of economic collapse.

Hariri was nominated PM in October but disagreements with Aoun over the number of seats in Cabinet have caused the process to hit an impasse.

Hariri has accused Aoun of demanding a ‘blocking third’, which would enable veto power for his party only, the Free Patriotic Movement.

Commenting on the issue, Hariri said the Constitution dictates that a government has to stand down if the president or more than a third of members resign.

“Consequently, the president’s acquisition of the blocking third gives him the ability to dismiss the government,” he said.

Speaking at the Parliament session ahead of Hariri, MP Gebran Bassil and head of the FPM, said that Aoun’s letter was not aimed at revoking Hariri’s position.

“The objective of my remarks is to urge the prime minister-designate to form the Cabinet and not for his designation to be withdrawn,” Bassil told lawmakers.

Bassil, who is also Aoun’s son-in-law, said that he denied allegations he is demanding veto power in the new government.

At the end of the meeting, Berri called for the quick formation of a government both in line with the Constitution and the president.