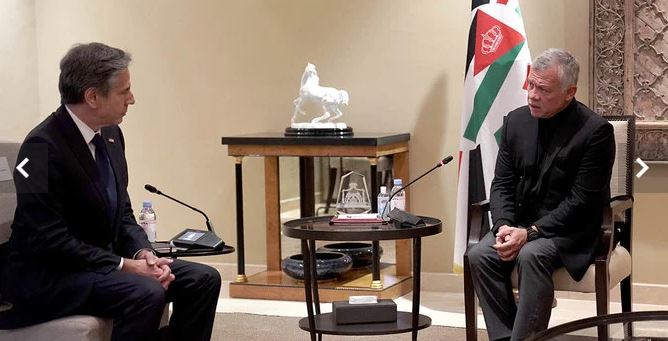 AMMAN: Jordan’s King Abdullah II warned against a continuation of the provocative Israeli violations in Jerusalem and the Al-Aqsa mosque, and the repeated and illegal attempts to displace residents in a number of east Jerusalem neighborhoods, especially Sheikh Jarrah, which led to the recent escalation, state news agency Petra reported.
Speaking during a meeting with US Secretary of State Antony Blinken on Wednesday, the king stressed the “necessity of preserving the existing historical and legal status of Jerusalem and its sanctities and away from prejudice,” adding that his country “will continue to make all efforts to protect Islamic and Christian holy sites in the holy city,” of which the Hashemite kingdom hold guardianship over.
The king said he appreciated the recent decisions taken by the US administration, including reopening the Palestinian consulate in Jerusalem, and resuming the support provided to the UN Relief and Works Agency for Palestine Refugees (UNRWA), adding that these steps will contribute to building confidence and pushing the political path forward.
Following talks with Palestinian president Mahmoud Abbas at his headquarters in the Israeli-occupied West Bank, Blinken vowed to rebuild US relations with the Palestinians by reopening a consulate in Jerusalem, as well as give millions in aid for the war-battered Gaza Strip.
The announcements signalled a break with US policy under former president Donald Trump, who had shuttered the diplomatic mission for Palestinians in 2019 and slashed aid to the Palestinian Authority.
King Abdullah praised Washington’s pivotal role in pushing for the re-launch of serious and effective negotiations between the Palestinians and the Israelis that would lead to achieving a just and comprehensive peace based on the two-state solution.
King Abdullah also expressed appreciation for the recent US efforts to end the escalating tensions in the Palestinian territories.
The king also said that “the absence of a political solution that meets the just and legitimate rights of the Palestinians and guarantees the establishment of their independent, sovereign and viable state on the June 4, 1967 borders, with east Jerusalem as its capital, pushes the region toward more tension and instability.”
Blinken, who arrived in Amman earlier on Wednesday on the last leg of a Middle East tour that aims to shore up an Egypt-brokered cease-fire between Israel and Palestinian factions in Gaza, told Jordan’s King Abdullah the reopening of the US consulate in Jerusalem would need a bit of time to carry out the move, which he announced on Tuesday.
Blinken was also quoted as saying that the Jordanian monarch had played an instrumental role in brokering the deal to end 11 days of fighting earlier this month.
He further said that aid had started to arrive in the Gaza Strip as part of a drive to help reconstruction in devastated areas of the enclave, ruled by Palestinian Islamist group Hamas.
He said the US greatly valued Jordan’s main role and efforts in maintaining regional security and stability.
The meeting was also attended by Crown Prince Hussein bin Abdullah and Foreign Minister Ayman Safadi.
Earlier, Blinken and Safadi held talks, where they stressed the necessity of joining all efforts in order to ensure a sustainable calm, the continuation of the cease-fire, and the prevention of any new escalation.
The two ministers stressed the importance of reconstruction and delivery of humanitarian aid to Gaza, and cooperation and coordination in these efforts with the Palestinian Authority, the UN, the Egypt, and regional and international partners.
Safadi also called for the need to stop all illegal Israeli steps and practices that triggered the latest escalation, stop the attacks on the Al-Aqsa mosque, and respect the rights of the residents in the Sheikh Jarrah neighborhood.