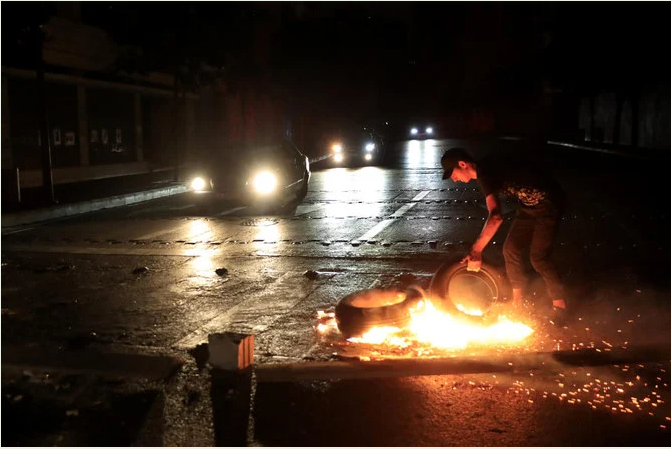 BEIRUT: The governor of Lebanon’s central bank reassured depositors on Thursday that it was not bankrupt and that people’s deposits were safe and would be returned soon, after reversing a decision to stop withdrawals that triggered street protests.
Angry Lebanese took to the streets late on Wednesday over a central bank announcement that withdrawals from dollar deposits at a fixed rate — much lower than on the informal market though higher than the official peg — would be halted.
“A decision to regard Circular 151 issued by the central bank as still in force has been made,” the presidency said in a statement after a meeting that included Salameh.
Lebanese banks have locked depositors out of their dollar accounts and blocked transfers abroad. But under Circular 151 issued last year, depositors have been permitted to withdraw dollars, with the funds paid in the local currency at a rate of 3,900 pounds to the greenback.
That is only about a third of the value of dollars on the black market — which on Thursday were traded at around 13,000 pounds to the dollar — but it has been the only way many Lebanese have been able to access their funds.
The official peg is set at 1,500 pounds to the dollar.
Lebanon is in the throes of a deep financial crisis, wrought by decades of endemic corruption, waste and mismanagement, that is threatening its stability and is described by the World Bank as one of the deepest depressions in modern history.
In a report this week, the World Bank forecast that Lebanon’s gross domestic product, which has already shrunk from $55 billion in 2018 to an estimated $33 billion last year, would contract by a further 9.5 percent in 2021.
The World Bank added that the crisis, which has led to shortages of basic imported goods, was being aggravated by a “debilitating institutional void” caused by high-level political deadlock.
The late night Wednesday decision to stop the withdrawals provoked indignation with protesters in Beirut blocking roads with burning tires and people lining up in front of ATMs to withdraw cash before the regulation took effect.
A senior official source, who declined to be named due to the sensitivity of the issue, said the move to halt withdrawals and then backpedal from it was a political maneuver to encourage depositors to be satisfied with a fixed rate still leaving them with a big loss on their money.70 percent
When the circular was issued last year Lebanon’s black market rate was around half of what it is now, and there have been calls for the bank to raise the fixed rate.
“So now people are begging for a 70 percent loss on the value of their deposit,” economic analyst Dan Azzi said.
The financial crisis has wiped out jobs, raised concerns for growing hunger and put more than half of the Lebanese population below the poverty line. The Lebanese pound has lost around 90 percent of its value since late 2019.
The central bank’s foreign reserves, which have been used to subsidise basic goods such as fuel, medicine and wheat, have dropped from over $30 billion prior to the crisis to around $15 billion in March.
“There is a major banking crisis and none of the perpetrators have been punished, on the contrary they have been allowed whatever they want to do and the perpetrators are the central bank and the commercial banks,” said Toufic Gaspard, an economist who has worked as an adviser at the IMF and to a former finance minister.
Political paralysis is complicating the economic meltdown with fractious political leaders unable to agree a new cabinet capable of implementing reforms required to unlock foreign aid.
Lebanon has lacked a government — the current one is acting in a caretaker capacity — since just after a massive blast in Beirut’s port last August that wrecked swathes of the capital.
Caretaker Prime Minister Hassan Diab urged politicians on Wednesday to set aside differences and form a government capable of re-engaging the International Monetary Fund before “total collapse” ensues.
Prime Minister-designate Saad Al-Hariri, who is backed by Western governments, has been at loggerheads with President Michel Aoun for months over naming ministers.
Aoun, a Christian, is an ally of Lebanon’s powerful Iran-backed Shiite Muslim movement Hezbollah, listed as a terrorist group by the United States.
Hariri, a veteran Sunni Muslim politician, has said the only way out of Lebanon’s crisis is through mending relations with its Arab neighbors. Gulf states, including Saudi Arabia, have been loath to offer aid to ease Beirut’s economic woes, keeping their distance in alarm over the rising influence of Hezbollah.