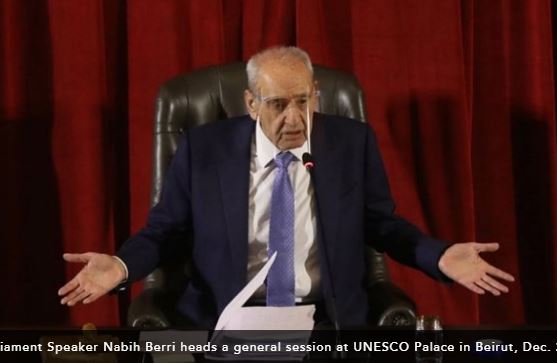 BEIRUT: All signs indicate that a fierce political battle is brewing in Parliament between President Michel Aoun and Prime Minister-designate Saad Hariri over the former’s letter to the legislative body seeking lawmakers’ help in resolving the monthslong Cabinet formation crisis.

Parliament Speaker Nabih Berri Wednesday called for a Parliament session to be held at 2 p.m. Friday at the UNESCO Palace to read and discuss the controversial letter in which the president accused Hariri of stalling on the Cabinet formation and warned of the negative effects of the delay in the formation of a new government.

Aoun’s unprecedented move is likely to ramp up tensions with Hariri and further complicate the already-stalled Cabinet formation process which has entered its ninth month with no solution in sight.

But opponents of Aoun and the Free Patriotic Movement headed by his son-in-law, MP Gebran Bassil, fear that the president’s move was aimed at reconsidering Hariri’s designation by a parliamentary majority on Oct. 22 to form a proposed Cabinet of nonpartisan specialists to deliver reforms contained in the French initiative designed to rescue Lebanon from its worst economic and financial crunch since the 1975-90 Civil War.

In a quick response to Aoun’s letter, Hariri accused the president of twisting facts over the Cabinet formation, vowing to confront the letter in Parliament.

“The president’s letter to Parliament is an act of persisting in the policy of twisting facts, evasion and covering up the racist diplomatic scandal of the [Aoun] mandate’s foreign minister toward brothers in the Arab Gulf … We will talk [about the letter] in Parliament,” Hariri wrote on his Twitter account overnight.

He was referring to caretaker Foreign Minister Charbel Wehbe, one of the ministers loyal to Aoun, who strained ties with Gulf Arab states when suggested in a television interview that these states had supported and financed the rise of Islamic State [Daesh]. In the face of nationwide condemnation of his comments and complaints by Gulf states, Wehbe after meeting Aoun Wednesday said he stepped down.

Former Premiers Najib Mikati, Fouad Siniora and Tammam Salam Wednesday criticized Aoun’s letter, saying it contained a lot of “fallacies” and accused the president of seeking to play the role of the premier-designate in the Cabinet formation. They said the letter’s contents constituted a “coup” against the Constitution. The three ex-premiers, who strongly supported Hariri’s designation and had criticized Aoun’s performance, accused the president of blocking the government formation with his demand for a blocking one-third [veto power], which Hariri has vowed not to grant to any side.

Expressing their “deep astonishment” over the letter, the three former premiers said in a statement, “The president’s letter is filled with fallacies and twisting of facts that happened in the designation of Prime Minister Hariri in the mission to form a government until now. Contrary to the truth, he [Aoun] tried to hold the premier-designate responsible for the results of the delay in the government formation and his refusal to carry out this mission according to the rules. The truth which the Lebanese public opinion knows is that soon after the designation decision was issued, Prime Minister-designate Saad Hariri began, according to the provisions of the Constitution, holding parliamentary consultations with various blocs without exceptions. He drew up a plan for the Cabinet formation and put it in the hands of the president without delay. He had declared more than once that he is ready for dialogue with the president on reaching an understanding with him on this matter. But what happened is exactly contrary to what the president said in his letter. The premier-designate did not meet favorable response or cooperation [from Aoun]. Instead, obstacles were put in his way which the president tried to impose, including the issue of the blocking one-third [veto power] and other new norms that are inconsistent with the provisions of the Constitution and are not recognized by our parliamentary democratic system.”

The three ex-premiers said Hariri had respected the rules and regulations and complied with constitutional norms in the Cabinet formation process, “but every time he was faced with obstacles and demands that run contrary to the Constitution.” They said they were surprised most when the president in the letter gave himself the premier-designate’s role in the Cabinet formation with regard to compelling the premier-designate to abide by criteria set by the president in the formation.

“What the president’s letter contained in this respect undermines the clear and frank provisions of the Constitution and the principle of separating the branches of power … and constitutes a real coup against the Constitution,” they said.

Instead of plunging the country into “a political, constitutional and even sectarian debate that could undermine the remaining foundations of coexistence in Lebanon,” the three ex-premiers said the president could have reduced the suffering of the people by “signing the Cabinet formation decree based on the formula the premier-designate presented to him and sent it to Parliament which is vested with either granting the government confidence or withholding it.”

In his letter, addressed to Berri Tuesday, Aoun demanded that the letter be discussed Parliament’s general assembly according to the rules and to take the “appropriate position, measure or decision on it for the benefit of the people who are anxiously waiting for a new government.” Aoun said the delay in the Cabinet formation was adversely affecting political stability, as well as economic, financial and health safety.

“The delay in the government formation more than six months after the designation of Prime Minister Saad Hariri to form it did not only have negative effects on the creation of the executive branch of power and the orderly functions of constitutional authorities in accordance with the provisions of the Constitution, but it also affected political stability and health, social, economic and financial safety and public services and prevented effective solutions to sensitive files amid inherited, proliferating and aggravating crises at more than one level,” Aoun said in his letter that was released by the presidency’s media office.

Aoun argued that Hariri had failed to form a government capable of negotiating with international funders on bailout plans to rescue the country’s ailing economy, burdened by a soaring national debt of $95 billion.

“It has become definite that the premier-designate is unable to form a government capable of salvation and [making] useful contacts with foreign finance institutions, international funds and donor states to draw up assistance programs that would rescue the nation that is bleeding precious blood at all levels,” Aoun said. He accused Hariri of holding up and perpetuating the Cabinet formation and “taking the people and governance together hostage that is being driven into the abyss, while ignoring any reasonable deadline for the formation.”

Aoun criticized Hariri for refusing to present another Cabinet lineup after his first draft Cabinet list was rejected by the president last year.

“The premier-designate is insisting until now on not presenting a Cabinet lineup that will gain our agreement and secures the confidence required from Parliament in accordance with the constitutional text,” Aoun said. “What is worst is that he [Hariri] has stopped consultations needed with the president to agree on a Cabinet lineup that can secure the confidence of Parliament, the Lebanese and the international community.”