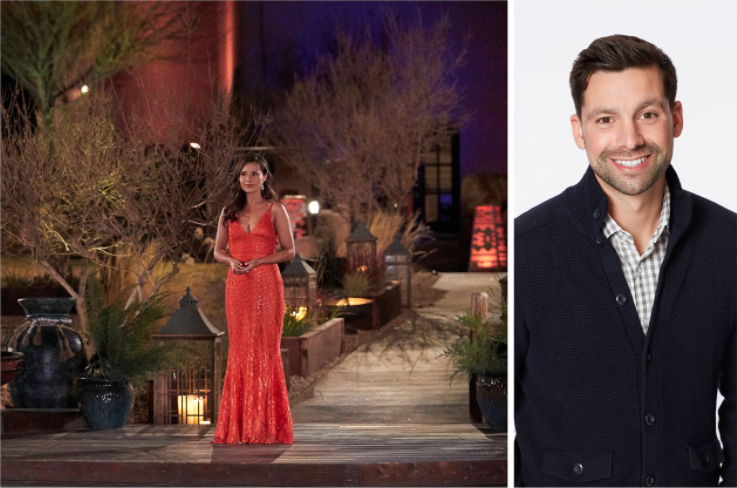 AKRON, Ohio – “The Bachelorette” contestant Michael Allio, an Akron business owner and entrepreneur, was one of 23 men who received a rose from bachelorette Katie Thurston at the end of the ABC season premiere Monday and moved on to the next round.

From jumping out of a truck bed filled with plastic balls, to faking a British accent, to dressing up as a cat, the 30 potential suitors pulled out all the stops to try to make an impression with Thurston on the hit TV reality series. One suitor even spent most of the episode in a blue wooden box decorated to look like a gift.

Allio, who said on the episode Thurston was “beautiful, down to Earth and fits the bill,” presented Thurston with a watch upon first meeting her when he stepped out of the limo. He joked that the watch was in his family for 200 years, but told her it symbolized how precious time is, and how important it is to spend it with people you want to be with.

Allio, 36, is only listed by his first name on the show’s website. But, “The Bachelor” blogger Reality Steve revealed Allio’s last name in March.

Allio is looking for a woman who is strong enough to stand up against ignorance, but who also has an excellent sense of humor, according to his show biography. Allio is the founder and owner of Allstera, a company that sells sanitation products and PPE, and vice president of sales and marketing for Mascot Workwear USA, according to his LinkedIn page.

In 2020, Allio was profiled in Crain’s Cleveland Business’ “40 Under Forty.” In the article, he shared that his wife, Laura, died of breast cancer in 2019. To honor his wife’s legacy, Allio founded the L4 Project, a clothing company that raises funds for existing nonprofit organizations that are “committed to advancing, supporting and enriching the lives of those fighting cancer.”

On Monday’s episode, Allio sat down with Thurston and discovered each has a pet named Tommy — Allio a dog and Thurston a cat. Allio also shared that he has a 4-year-old son.

Thurston, 30, was a fan favorite on season 25 of “The Bachelor” starring lead Matt James. She is a bank marketing manager from Washington, according to her biography for the show.

Upon receiving a rose at the end of the episode, Allio said he felt, “rejuvenated, alive, and like this could be something real.”

The 17th season of “The Bachelorette” airs at 8 p.m. on Mondays on ABC. If you don’t have cable you can sign up for a free 7-day trial of Fubo, which carries ABC.