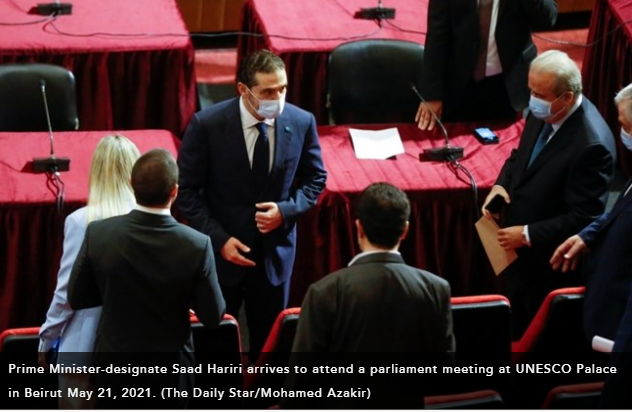 BEIRUT: The stalled Cabinet formation process appeared Sunday up in the air a tension-filled Parliament session that saw Prime Minister-designate Saad Hariri accuse President Michel Aoun of deliberately blocking the government formation and seeking to remove him and change the Constitution.

Hariri’s tough speech in response to Aoun’s letter to Parliament over the obstacles hindering the formation of a new government reflected spiraling tensions and a deepening crisis of confidence between the two leaders, dashing hopes for any imminent breakthrough in the Cabinet formation crisis that has entered its ninth month with no solution in sight.

Aoun and Hariri have refused to budge on their conflicting positions on the Cabinet issue. They remain at odds over the distribution of key ministerial seats, namely the Justice and Interior ministries, and the naming of Christian ministers. The two leaders have not been on speaking terms for more than two months since their last meeting at Baabda Palace on March 22 that failed to resolve their differences over the size and makeup of the government.

“Aoun’s letter to Parliament in which he accused Hariri of stalling on the Cabinet formation and the premier-designate’s scathing response have indicated that the two leaders are not ready or willing to soften their positions,” a political source familiar with the matter told The Daily Star.

After a two-day session devoted to reading and discussing Aoun’s letter, Parliament Saturday called on Hariri to press ahead with his attempts to quickly form a new government, in what appeared to be a rebuff to the president’s bid to revoke Hariri’s designation.

In his letter to Parliament, Aoun asked lawmakers to discuss and take the “appropriate position, measure or decision on it for the benefit of the people who are anxiously waiting for a new government.” Aoun blamed Hariri for the Cabinet crisis and claimed that he was unable to form a government to rescue the country.

“Everyone knows that the Aoun-Bassil team is the one obstructing the Cabinet formation. Through his letter, the president wanted to push Parliament to find a way to strip the premier-designate of his designation. But of course he could not achieve this because Parliament’s response was clear and compelling,” Hajjar told The Daily Star Sunday, referring to MP Gebran Bassil, Aoun’s son-in-law and the head of the Free Patriotic Movement.

“Everyone knows that the president, even before Hariri’s nomination, did not want Hariri to be designated to form a new government and he worked to postpone the binding consultations for this purpose and even threatened the MPs not to nominate Hariri as premier-designate,” he said.

Since Hariri’s designation on Oct. 22 with a parliamentary majority of 65 MPs to form a new government, Hajjar said, “the president has been trying to put obstacles in the way of the formation using different pretexts.”

“Now, if the president wants to respond to the MPs’ desire, he must facilitate the government formation. Or he has another option which is to sign the decrees of the Cabinet lineup he already has. Afterward, the Cabinet will go to Parliament to seek a vote of confidence. It will then be up to Parliament to either grant or withhold confidence and Prime Minister Hariri will bow to Parliament’s will,” Hajjar added.

So far, Aoun has not commented on Hariri’s speech. “The aim of the presidential letter to Parliament was to inform the MPs of the situation to which the Cabinet formation process has reached and ask the MPs to take what they deem fit,” an official source familiar with the matter told The Daily Star Sunday.

The source said Parliament’s call on the premier-designate to form a government in agreement with the president “must push Hariri to present a new Cabinet formula that takes into account the president’s remarks on the first lineup which did not respect the [National] Pact requirements, balance and specialization.”

“Hariri must stop obstructing the Cabinet formation by sticking to his position and upholding the lineup he presented which the president has rejected,” the source said. He added that Aoun has called on Hariri to come to Baabda Palace to consult on the Cabinet formation.

“The president adheres to the Constitution which states that the government is formed in agreement between the president and the premier-designate and not as Hariri says that he is the one who forms and that the president signs and after which the [Cabinet formation] decree is issued,” the source said.

In announcing Parliament’s position, Berri said: “… Out of Parliament’s keenness not to enter into new constitutional and [National] Pact-related crises and out of keenness on stability in a complex and dangerous stage economically, financially and socially that requires giving priority to the work of institutions, Parliament stresses the need for the premier-designate to press ahead according to constitutional rules to quickly form a new government in agreement with the president.”

After the session, Berri met separately at his office with Hariri and Bassil in an attempt to defuse rising tensions between the two sides that would definitely further complicate the Cabinet formation process.

In his speech, Hariri vowed not to step down in the face of what he called Aoun’s deliberate obstruction of the Cabinet formation, saying he would not form a government under Aoun’s demands.

“In form, we are before a president who is exercising a constitutional right in sending a letter to Parliament asking it to discuss it and take what it deems appropriate on it. But in reality, we are before a president who tells the MPs: You have nominated a prime minister whom I don’t want and I will not allow him to a form a government. Please act to rid me of him. This is the reality,” Hariri said.

Hariri accused Aoun of having a “great experience” in obstructing the formation of successive governments for long months.

“Therefore, the decision was and is still the obstruction of the government formation and using the time to push Saad Hariri into stepping down just because his excellency the president does not want to recognize the Parliament’s will,” Hariri said. “I want to be clear like the sun: I will not form a government as the team of his excellency the president wants it, nor as any other political group wants it. I will only form the government that stops the collapse and prevents the great crash that threatens the Lebanese in their food, health, lives and their state.”

Hariri has long accused Aoun of demanding a blocking one-third, which would grant him and the FPM veto power, something the premier-designate has vowed not to grant to any side.

“For my part, I am committed before your honorable Parliament, before the Lebanese people and before God, that I will not give up, nor get tired and I will continue working to attract the support to halt the collapse and open a glimmer of hope for our country and our good people in all its parts and in diaspora,” Hariri said.

Speaking at the Parliament session ahead of Hariri’s speech, Bassil defended Aoun’s letter, saying it was aimed at urging the premier-designate to speed up the formation of a new government to implement reforms rather than calling on Parliament to revoke Hariri’s designation. Although they sat in the front row at the UNESCO Palace, Hariri and Bassil did not shake hands or speak to each other.

“The aim is to urge Hariri to form [a government] and nothing else … The aim of my speech and President Michel Aoun’s letter is not for the premier-designate’s designation to be withdrawn from Parliament,” he said.