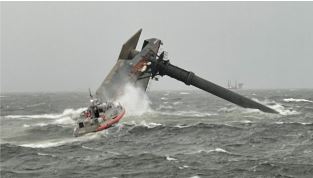 Rescuers are searching for the missing crew members of a large commercial vessel after it capsized off the US state of Louisiana.

The US Coast Guard on Wednesday confirmed one person was found dead and six others have been rescued. There were reportedly 19 people on board.

The vessel was identified as belonging to marine transport firm Seacor Marine.

A lift boat is a self-propelled vessel with an open deck, often using legs and jacks, and is deployed to support drilling or exploration.

A Coast Guard spokesperson said during a briefing on Wednesday that the search team was “giving it all we got” and remained optimistic.

Seacor spokesman Armond Batiste told the New York Times that the ship was the Seacor Power.

In an earlier statement, the Coast Guard said it had received an emergency radio notification at 16:30 (21:30 GMT) that there was a distressed commercial vessel about eight miles from the coast.

It said an “urgent marine information broadcast” had been issued which “multiple good Samaritan boat crews responded to”.

Two Coast Guard ships rescued one person each, while civilian boat crews pulled four
additional people out of the water.

Another person was found dead as rescue operations continue amid choppy waters.

There are now four Coast Guard vessels, four civilian “good Samaritan” boats, and an
Ocean Sentry search and rescue aeroplane searching the water for the rest of the crew.

While incidents are decreasing year-on-year, there are still dangers associated with
commercial shipping.

One-third of ship losses in 2019 happened in South China, Indochina, the Philippines and
Indonesia, the report added – describing this area as “the global hotspot”.