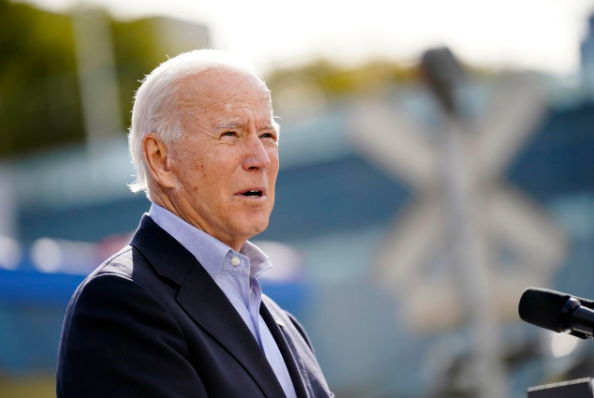 WASHINGOTN, D.C. – President Joe Biden will visit Cuyahoga Community College in Cleveland on Thursday to deliver a speech on the economy that his principal deputy press secretary said will “make a clear case that his economic plan is working.”

“He’ll talk about how far we’ve come as a country because of the actions we’ve taken over the last four months, turning the tide on the pandemic, creating 500,000 new jobs each month on average, cutting unemployment claims by more than a third, raising wages and leading the … recovery,” Karine Jean-Pierre told a Wednesday press briefing.

She said Biden will discuss why “now is the right moment” for workers in places like Cleveland to pass his “Building Back Better” infrastructure and families proposals, which she said would make “historic generational investments … that will create good paying union jobs, expand economic opportunities for all Americans and help us out-compete the rest of the world in the 21st century.”

U.S. Sen. Sherrod Brown said he won’t be at Tri-C with Biden because of business before the U.S. Senate, but otherwise would have been there to help him build support for his infrastructure proposal and the American Families Plan that he’s introduced.

“That’s what his presidency is right now: to do big things on infrastructure and big things on the families agenda,” said Brown, an Ohio Democrat who actively campaigned for Biden. “I support all of that, and .. I think we’re making a lot of progress and I think Biden’s already done more in the first 120 days than any president in my lifetime, and he is driving full speed ahead because we have so many problems in this country.”

When asked Tuesday about Biden’s visit, Ohio Republican U.S. Sen. Rob Portman said he hopes Biden will address the huge gap between the needs of the nation’s economy and the available workforce. Portman said the $300 weekly supplement the federal government is providing to unemployed workers is dissuading people from returning into the work force and that he hopes Biden will discontinue it nationwide. Several states including Ohio have said they’ll stop taking the money.

Portman also said he hopes that Biden will discuss the need to fund worker training programs as the bipartisan “Jobs Act” that Portman has introduced would do.

It’s a great opportunity for him and for our country to get people back to work,” said Portman. “We have unemployment under five percent in Ohio and it can be a lot lower if the government was helpful in getting people back to work.”

Portman also cautioned that all the stimulus money that the federal government wants to pour into the economy will lead to inflation.

“We are just dumping so much more federal money into the system, and wanting to pay for it by tax increases that will make us less competitive in the global economy,” said Portman. “So, I’m concerned about that.”

In a cleveland.com opinion piece, Ohio Republican Party chair Robert Paduchik, a former U.S. Energy Department official, argued that Biden’s policies have already done severe damage to the economy and jobs, citing his decision to halt construction of the Keystone XL pipeline, his decision to lift sanctions on the Nord Stream 2 pipeline in Europe, and his “radical environmental policies.”

“President Biden’s first months in office exemplify how little he cares about America’s working men and women,” Paduchik said. “His visit to Ohio this week will give him ample opportunity to justify to Ohioans why he is bucking Ohio jobs and bolstering Russian jobs. If not, perhaps President Biden should be giving his ‘jobs’ speech in Moscow instead of Cleveland.”

This will be Biden’s second trip to Ohio as president. In March, he visited Ohio State University’s James Cancer Research and Treatment Center, recounting his administration’s progress in overseeing the delivery of COVID-19 vaccines to Americans